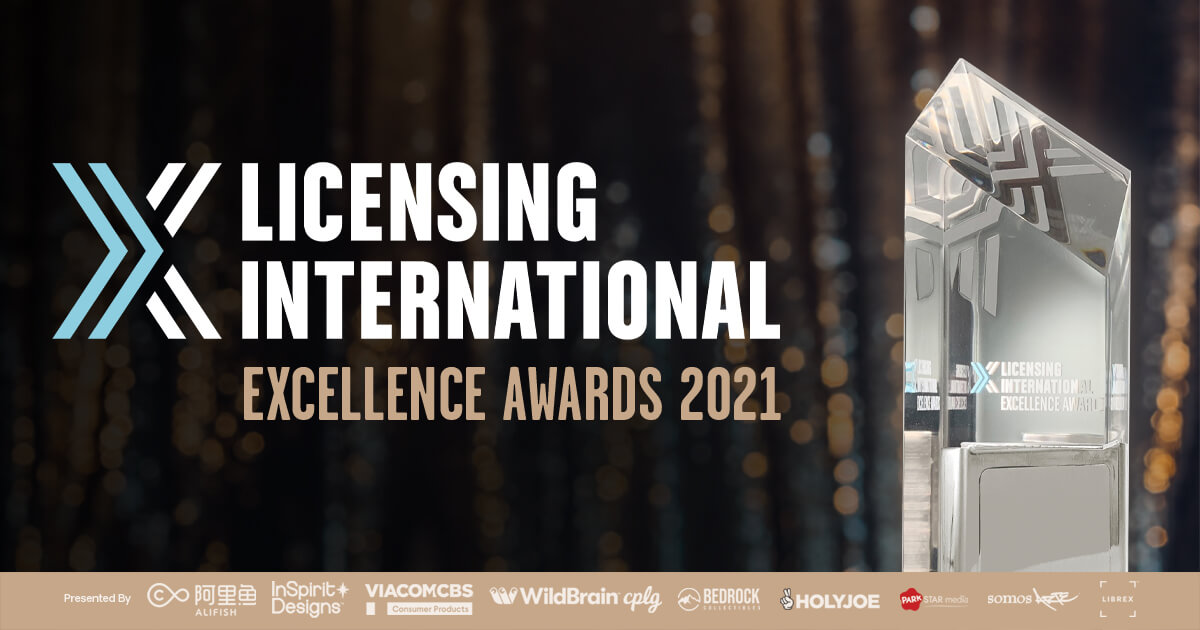 New York, NY, August 24, 2021 – The winners of the 2021 Licensing International Excellence Awards were unveiled today in a virtual gathering that brought together nearly 1000 industry executives from around the world to celebrate the best of the best.

The 22 award winners from seven countries – China, Finland, France, Japan, Singapore, United Kingdom and the U.S. – were selected from among 152 nominees from around the world who made the final ballot. More than 650 entries were received, and an elite global judging panel narrowed those entries down to the final ballot, which was voted on by members of the licensing industry at large. The winners were announced from locations around the world by executives from the event sponsors – Alifish, InSpirit Designs, ViacomCBS Consumer Products, and Wildbrain CPLG.

The awards honor innovation and creativity in the way brands use licensing to further their goals; how licensees develop and bring to market products using those licenses, and how retailers creatively spotlight licenses on their shelves. One special award added this year was for the Pandemic Pivot, recognizing companies’ efforts to use licensing to react to the effects of the global pandemic. From among six companies on the ballot, Peanuts Worldwide took home that honor for its work in developing and making available for free in-home educational materials and lesson plans, among its other efforts.

In addition to honoring the work of the nominees and winners, the ceremony included the announcement that Kathy Ireland, CEO and Chief Designer at Kathy Ireland Worldwide; and Salvatore LaRocca, President, Global Partnerships of the National Basketball Association, as the newest inductees into the Licensing Hall of Fame; they’ll be formally feted at an event in late October.

“In our 36th year of honoring the best of the global licensing industry, it’s inspiring to see the quality of the work produced by people and companies even as they were adapting to new ways of creating and collaborating amid the effects of the pandemic,” says Maura Regan, President, Licensing International. “The achievements that we honor today are testament to the power of brands, and the power of licensing as a business to create products and programs with lasting appeal.”