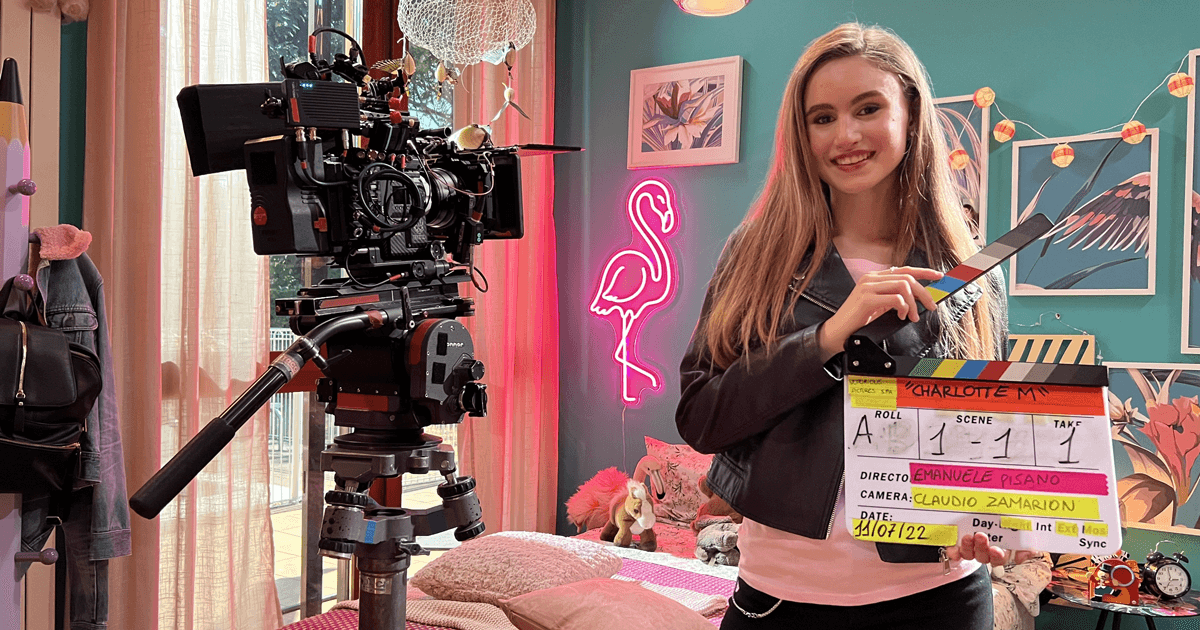 Charlotte M. invites fans to a Flamingo Party in her new film

The first film from the hugely popular YouTuber and TikTokker Charlotte M. is on its way

The young content creator .who has been a hit on the web since 2016 with numbers exceeding one million on TikTok and YouTube, is now the star of the soon-to-be released Charlotte M. – The Flamingo Party film.

Produced by Notorious Pictures and directed by Emanuele Pisano, the film, to be released in early 2023, tells the story of young Charlotte, in her first year of high school, dealing with adolescence and much more with her hallmark creativity and spontaneity.

In the film the flamingo oasis near her grandmother’s country home, a place she loves, is about to close due to lack of funding. So, together with her inseparable companion Sofia and other friends, she decides to organize a fundraising event to save the oasis: a school dance. But things don’t go entirely to plan – especially after the arrival of a new boy in town.

Like the content that has made her popular, the film is about the real life of teenagers, dealing with themes such as great friendship, intense first loves, and above all self-acceptance. These reflect the themes that Charlotte M. herself deals with in an accessible, relatable way for her young audience, not just in her social media content but also in the books and comics she has written and devised, and of course her songs. In fact the film will include two new music tracks performed by the influencer herself.

Charlotte M.’s enormous success is down to her ability to reflect real teenage life, making herself a reference point for her peers looking for inspiration. She’s a teenage influencer whose success is founded not just on appearance but on diverse content that includes music, poetry, singing, acting and writing.

This project is the latest triumph in a year full of successes that include the release of Charlotte M.’s latest single “Best Friend”, a real fan favourite, and her third book “La Mia Vita Segreta”, published by Fabbri Editori.

She’s also a licensing star. Giochi Preziosi has created a fantastic line of backpacks, pencil cases, a diary and stationery based on Charlotte’s unmistakable style for the back-to-school 2022 market, while Easy Shoes has launched a spring/summer 2022 collection of sneakers in four different colours; a new collection is due for the autumn/winter season.

Mitama meanwhile has launched a collection of Charlotte M. accessories under the heading Glitter, with stationery items that include notepads, a transparent glitter case and six-colour pen, a slime kit in two colours, a secret diary (with lock), a water bottle and a super fashion bag.

Salati Prezios has brought special Charlotte M. crisps to supermarkets; inside each bag are colourful Charlotte M. stickers; Cerealitalia, with the Dolci Preziosi brand, came out with an Easter egg for Easter 2022 and already has plans for an Epiphany stocking in January 2023.

In addition, last May Charlotte M. was a guest at Leolandia, the children’s amusement park, for a very exciting special appearance for her fans – known as flamingos – including songs and meet-and-greets.

Maurizio Distefano, president of the agency, says, ” It’s very exciting to follow the development of this property, which is constantly evolving and always rewarding, thanks to wonderful collaborations and projects that make the most of the many talents of Charlotte M. And now there’s a new film! Fans will, I suspect, be looking forward with enormous excitement and anticipation to Charlotte M. – The Flamingo Party film ahead its release in early 2023. The Charlotte M. story just gets bigger and better every day!”