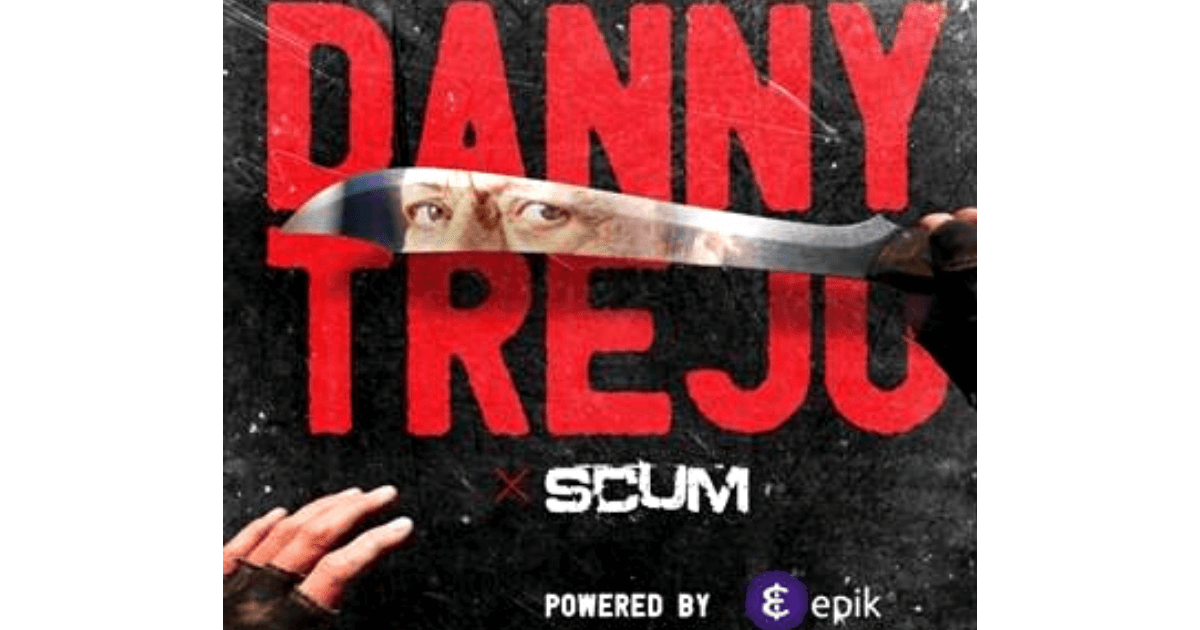 Trejo Is Conquering a New World as a Playable Character in SCUM, and an Entire NFT Collection Available on EPIK Prime

“Introducing Danny Trejo as a playable character is the perfect addition to SCUM and the one-of-a-kind experience we’re delivering to gamers worldwide,” said Tomislav Pongrac, Co-founder and Creative Director at Gamepires. “Epik has been an incredible partner, opening doors to new opportunities that would otherwise be out of reach. We’re confident the new DLC will be a fan favorite and will help us further redefine the survival genre with new and unique experiences players will love.”

Coinciding with SCUM’s upcoming downloadable content (DLC), Danny Trejo is also launching his first ever NFT collection, titled “The Many Faces of Danny Trejo,” soon to be available on the Epik Prime Marketplace. The new collection pays homage to the remarkable life of the Los Angeles-born actor, who has been featured in countless films and is one of the most recognizable actors in all of cinema.

“I’ve been fortunate to work on some incredible projects throughout my career, but seeing myself in a badass game like ‘SCUM’ has got to be one of the highlights,” said Danny Trejo. “Working with Epik and Gamepires has been an awesome collaboration. This partnership is an opportunity to engage with fans on a different level.”

The new SCUM DLC will be available soon and features Danny Trejo as an in-game playable character with multiple options, accessories and customization for players to choose from. This includes several new items and in-game collectibles such as clothing, weaponry, mannerisms and more, all inspired by the unique roles and characters that made Trejo famous. The in-game avatar is modeled after Danny Trejo in the 1990s and is voiced by Trejo himself.

“Gamepires has reimagined the survival genre with SCUM, and no one better reflects the look, feel and excitement of the game than the iconic Danny Trejo. We’re confident SCUM gamers and Trejo fans will enjoy this one-of-kind collaboration as much as we have,” said Victor David, CEO at Epik.  “Danny brings his passion and enthusiasm as an actor to all of his art, from his in-game avatar to his new collection of NFTs. Be on the lookout for more exciting new collaborations coming soon!”

Danny Trejo and Gamepires are just two of the latest additions to an ever-growing list of world-leading brands, IP owners and game developers in Epik’s partner ecosystem, which includes ViacomCBS, Warner Music, Universal Music Group, Tencent, Garena, and many more.

By joining Epik’s licensing network, brands can scale and expand their reach with better control over their digital partnerships while gaining granular insights that were previously impossible. Epik’s blockchain-powered capabilities present a low-risk, high-rewards opportunity to explore the NFT space. Brands gain access across the world’s largest network of game companies and crypto marketplaces, a powerful confluence reshaping the global advertising industry with Epik at the forefront of this exciting transformation.

With more than 300 video game clients, Epik is the leading global licensing agency putting brands into video games to produce premium digital items and experiences for over one billion gamers worldwide with the largest digital ecosystem with hundreds of the world’s most popular entertainment brands. Epik is widely considered to be the blockchain industry leader producing collaborations for premium licensed digital collectibles, NFTs and exclusive experiences powered by an interoperable proprietary cross-chain technology. Epik was the first and only NFT company to do any deals with AAA gaming companies for NFTs. Clients include ViacomCBS, Warner Music, Garena, Tencent and Universal.

The Gamepires studio is best known for the success of their survival game SCUM, which reached 250k sales in first 24 hours after release and over 1 million sales in 3 weeks, making it the fastest selling new game on Steam at the time. Prior to Scum, Gamepire released the Gas Guzzlers Extreme game series rated with an overwhelming 89% positive score on Steam, winning “Best Racing Game” for the year 2013. Gamepire created their own proprietary PranaEngine game development platform to deliver high quality games, efficiently and economically. They are a passionate team committed to providing best-in-class gaming experiences and continuously push the limits of our gaming worlds.

Danny Trejo is a prolific actor, producer, activist, author and restaurateur with a hard-earned and atypical road to success. From years of imprisonment to helping troubled youth battle drug addictions, from acting to producing, and now restaurant ventures, Trejo’s name, face, and achievements are well recognized in Hollywood and beyond.

Trejo has starred in some of the most popular and iconic films including “Desperado,” “Heat,” “From Dusk Til Dawn” , “Con Air,” “Once Upon a Time in Mexico,” the “Spy Kids” movies, “Machete,” and “Machete Kills,” the “Bad Ass” trilogy, “Dead Again in Tombstone” and co-starred in “Death Race 2,” “Death Race: Inferno,” “Muppets Most Wanted,” “Grand Daddy Day Care,” “3 From Hell” and “Muppets Haunted Mansion.” On television, he reunited with Robert Rodriguez for “From Dusk Til Dawn: The Series” and has appeared in “Sons of Anarchy,” “King of the Hill,” “Breaking Bad,” “The Flash,“ “Blue Bloods,” “Brooklyn Nine-Nine” and “Kidding.” Trejo has also starred in and voiced various popular video games like “Call of Duty,” “Fallout,” “Teenage Mutant Ninja Turtles,” “Grand Theft Auto,” and “Def Jam.”

In addition to acting, Trejo has expanded his empire to include a series of successful Los Angeles restaurants. His first endeavor was Trejo’s Tacos (2016) which now has eight locations, followed by Trejo’s Cantina (2017) and Trejo’s Coffee & Donuts (2017).