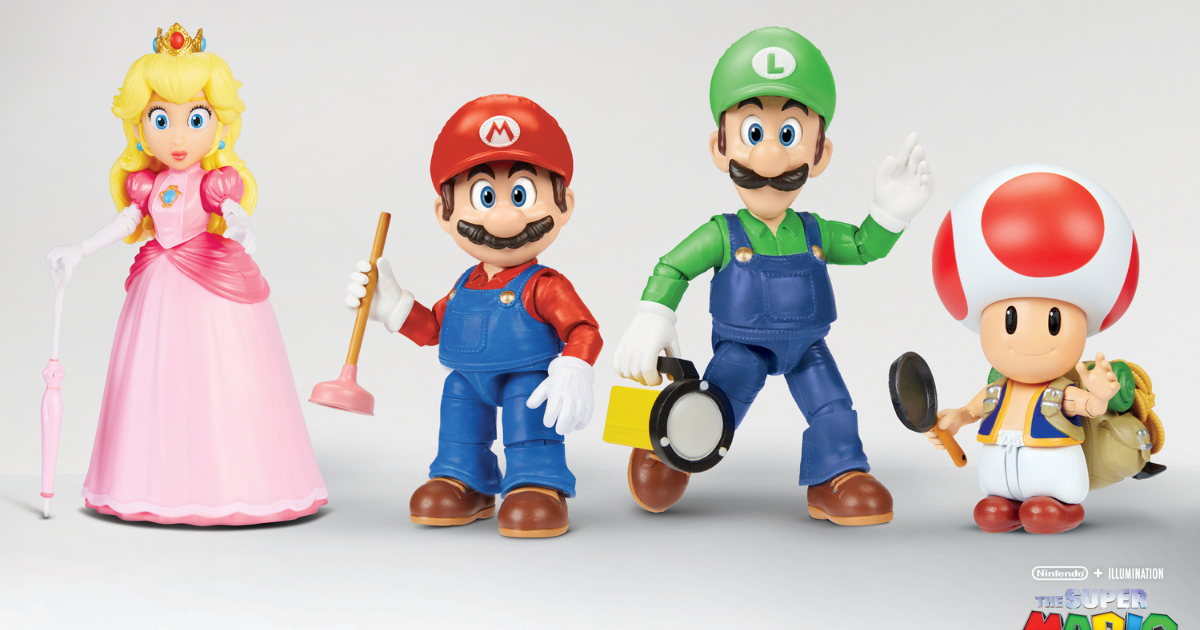 Santa Monica, CA —– JAKKS Pacific will be bringing to market a toy line for the highly anticipated new film from Illumination and Nintendo, The Super Mario Bros. Movie, arriving in theaters April 7, 2023. Look forward to posable figures, accessories, playsets, plush and a super cool RC from the movie coming to shelves and online in North America, Asia-Pacific, Latin America, Europe, Middle East and Africa on Feb. 26, 2023.

“In partnership with Illumination and Nintendo, we have enjoyed collaborating with JAKKS Pacific to launch an all-new line of toys for The Super Mario Bros. Movie,” said Joe Lawandus, Senior Vice President and General Manager, Global Toys, Hardlines & Publishing, Universal Products & Experiences. “We’re as excited as the fans for the film’s release and can’t wait for their reaction to our line of film-inspired toys.”

“JAKKS Pacific has been excited about working with Illumination, Nintendo and Universal Products & Experiences to develop a line of unique toys for The Super Mario Bros. Movie available on Feb 26., 2023,” said Craig Drobis, Senior Vice President of Marketing at JAKKS Pacific, Inc. “Our collector and fan community will be thrilled with JAKKS’ new scales that really bring home the rich details inspired by the characters and sets on the big screen, including our new 5” figures with realistic acrylic eyes and movie accessories in a premium window box.  We’re excited to unveil even more very soon.”

JAKKS Pacific, Inc. is a leading designer, manufacturer and marketer of toys and consumer products sold throughout the world, headquartered in Santa Monica, California. JAKKS Pacific manages a broad portfolio of licensed and owned I.P. brands and products, with best sellers such as Super Mario figures, plush and playsets. All products will be available online or in retail stores nationwide.

About Illumination and Nintendo’s, The Super Mario Bros. Movie

From Illumination and Nintendo comes a new animated film based on the world of Super Mario Bros. The film will be released in North America on April 7, 2023 and in Japan on April 28, 2023.

Illumination, founded by Chris Meledandri in 2007, is one of the entertainment industry’s leading producers of event-animated films, including Despicable Me—the most successful animated franchise in cinematic history—as well as Dr. Seuss’ The Lorax, Dr. Seuss’ The Grinch and The Secret Life of Pets and Sing films. Illumination’s soon-to-be released Super Mario Bros. movie will join a studio library that includes two of the top 10 animated films of all time. Illumination’s iconic, beloved franchises—infused with memorable and distinct characters, global appeal and cultural relevance—have grossed more than $8 billion worldwide. Illumination has an exclusive financing and distribution partnership with Universal Pictures.  Illumination’s upcoming films include the new Super Mario Bros. film in April 2023 and Migration in December 2023.

Nintendo Co., Ltd., founded in 1889, and headquartered in Kyoto, Japan, has created characters and game series that have become household names worldwide, such as Mario™, through its integrated hardware and software business. From the launch of the Nintendo Entertainment System™ in 1983, through today and into the future, Nintendo’s continuing mission is to create unique entertainment that puts smiles on the faces of people all over the world.

Universal Products & Experiences (UP&E) globally drives the expansion and elevation of NBCUniversal’s iconic collection of brands, intellectual properties, characters, and stories based on the company’s extensive portfolio of properties created by Universal Pictures, Illumination, DreamWorks Animation and NBCUniversal Television and Streaming. The division executes this through innovative physical and digital products, engaging retail and product experiences across our expansive global theme park destinations (for both owned and 3rd party IP), location-based venues, e-commerce product platforms, and retailers around the world. Along with global brand strategy and creative, UP&E’s three lines of business include Consumer Products, Games and Digital Platforms, as well as Theme Parks Products & Retail. UP&E is a division of Universal Parks & Resorts, part of NBCUniversal, a subsidiary of Comcast Corporation.

JAKKS Pacific, Inc. is a leading designer, manufacturer and marketer of toys and consumer products sold throughout the world, with its headquarters in Santa Monica, California. JAKKS Pacific’s popular proprietary brands include: Fly Wheels®, Perfectly Cute®, ReDo Skateboard Co.®, X Power Dozer®, Disguise®, Weee-Do™ and a wide range of entertainment-inspired products featuring premier licensed properties. Through JAKKS Cares, the company’s commitment to philanthropy, JAKKS is helping to make a positive impact on the lives of children. Visit us at www.jakks.com and follow us on Instagram (@jakkstoys), Twitter (@jakkstoys) and Facebook (JAKKS Pacific).