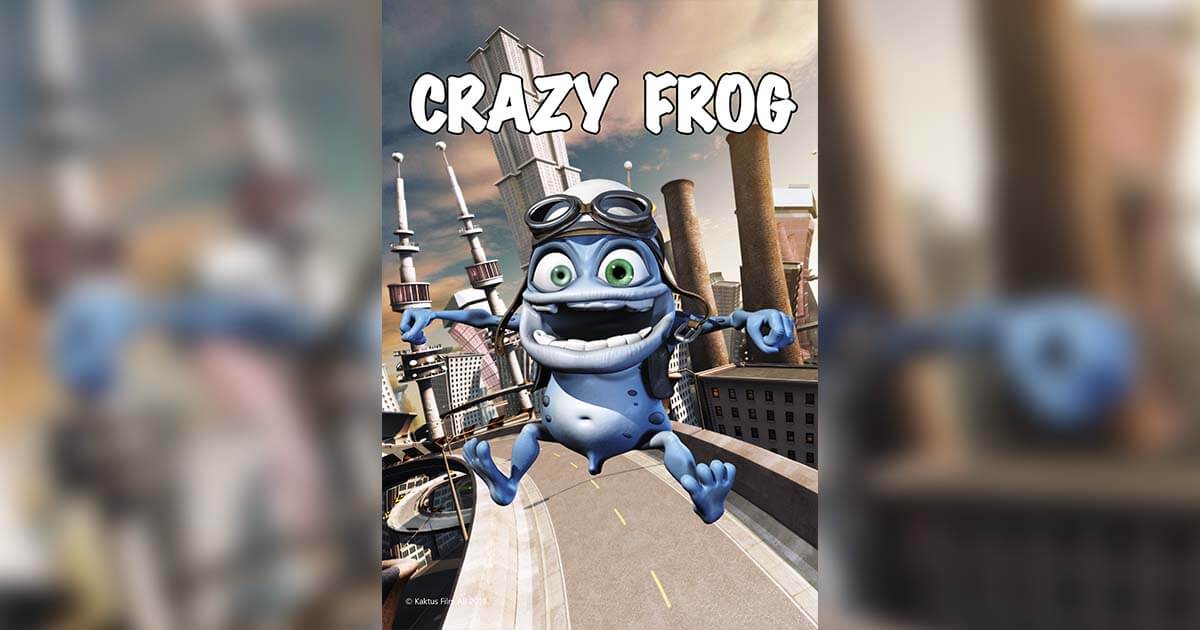 New York, NY — King Features Syndicate, a unit of Hearst and home to some of the world’s most popular entertainment characters, today announced that the viral music phenomenon, Crazy Frog, is joining its roster of licensing properties. Under the agreement, King Features will represent Crazy Frog across all categories in North America, including apparel, accessories, collectibles and more.

Crazy Frog, the global entertainment phenomenon that went viral before social media, smartphones and apps became mainstream, is making a comeback and growing its reach with new songs and music videos, a short-form YouTube series and smartphone games. After first debuting in 2005, Crazy Frog music rose to No. 1 on hit lists all over the world backed by several high-end animated music videos. On YouTube today, Crazy Frog has 5.5 billion official video views, 11 million channel and 3 million video views daily.

As this viral sensation continues its global comeback, King Features is building upon Crazy Frog’s massive international success, seeking partners across all categories to develop a robust merchandising program with creative partnerships targeting all ages.

King Features will kick off Crazy Frog’s North America merchandising program with collectibles from Youtooz, launching later this year to coincide with the drop of Crazy Frog’s upcoming new music. Youtooz, the company turning nostalgia and internet culture into amazing products that people love, will be debuting a vinyl figure collectible series worldwide, followed by a line of plush figurines.

“Crazy Frog has been a global sensation for years with its fun and catchy music, and we are thrilled to welcome this beloved character to the King Features family,” said Carla Silva, vice president and general manager, global head of licensing, King Features. “The brand already has such a dedicated fanbase and we look forward to continuing growing its presence within North America through exciting content and merchandise that everyone can enjoy.”

“We are very happy to have King Features on board for the new Crazy Frog adventures,” said Sigfrid Soderberg, CEO and executive producer of CF Entertainment, the IP owners of the character and original creators of the animated content. “We were looking for a creative and experienced partner in licensing to further elevate our brand on the North American market and King Features felt like a perfect match. The new creative content paired with King Features experience speaks of a long-lasting relationship.”

Crazy Frog is just the latest brand to join King Features’ ever-expanding portfolio of licensed properties including Popeye, Olive Oyl, Cuphead, The Phantom, Flash Gordon and recent IP additions like Pucca, Moomin and PURENorway. The Crazy Frog announcement comes on the heels of King Features’ recent expansion with popular Korean animated character, Pucca, for licensing representation in North America as they continue to grow their presence in the territory.

About King Features
King Features is a premier producer and distributor of the world’s most iconic intellectual properties and a leader in classic character licensing and franchise development. With one of the longest-running consumer products programs in the industry, King Features’ portfolio includes world-renowned pop culture brands such as Popeye®, Cuphead, Flash Gordon™, The Phantom™, Hägar the Horrible, Moomin, Prince Valiant® and Mandrake the Magician. King Features will produce The Cuphead Show! with Netflix Animation, set to debut in 2021. As content syndication specialists, the company distributes beloved comics such as Blondie, Beetle Bailey®, Mutts™ and dozens of others as well as columns, editorial cartoons and puzzles across multiple platforms and content providers around the globe. King Features is part of Hearst Newspapers, which publishes 24 dailies and 52 weeklies, including the Houston Chronicle, San Francisco Chronicle and Times Union (Albany, New York), and operates local digital marketing services and directories.

About Crazy Frog
Crazy Frog is the goggle-wearing, high-voltage, helium-voiced, blue-gray character whose global entertainment phenomenon went viral before social media, smartphones and apps were mainstream. With a unique platform, Crazy Frog music rose to No. 1 on hit lists all over the world, backed by a number of high-end animated music videos. Today, with 11 million subscribers on YouTube and 5.5 billion video views, fans around the globe will be thrilled to know Crazy Frog is launching fresh content in 2021.

Youtooz turns the joy of internet culture into amazing products that people love. A consumer product company, Youtooz captures the best moments of the internet and brings them to life through high-quality, unique product drops. The company seeks inspiration from its community and content creators across the internet, and works together, along with its IP and license partners, to create collectibles, plushies and other products that bring joy to everyone. Since its launch in 2019, Youtooz has released more than 300 unique figures and believes that together, we can create joy in anything. To learn more, visit www.youtooz.com, and check us out on social on our Twitter and Instagram.