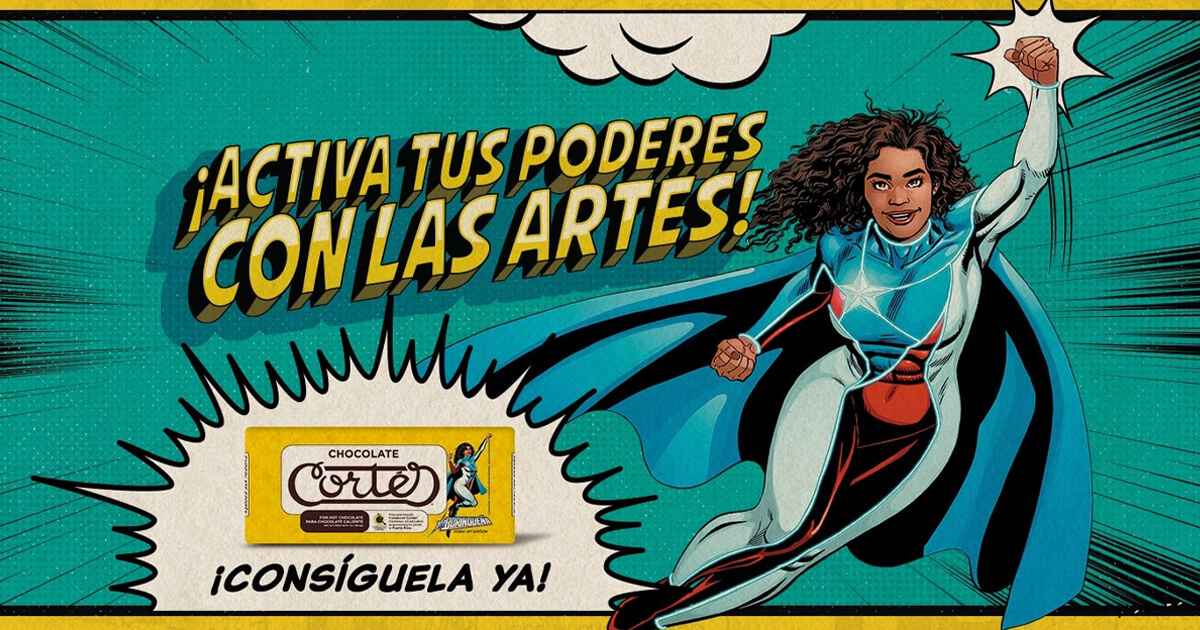 As part of the company’s 90-year history, this alliance is made possible through the efforts of the Cortés Foundation.

Chocolate Cortés and Edgardo Miranda-Rodriguez, creator of La Borinqueña, a Puerto Rican comic book heroine, created an alliance to help strengthen the values ​​of the people through the arts and humanities. To this end, the campaign Activa tus poderes con las artes (Activate your powers with the arts) has been developed to raise awareness of the Cortés Foundation’s cultural and educational programs in Old San Juan. The campaign will feature several executions that will be taking place throughout this year beginning with an art exhibit.

“As part of the 90-year history of Cortés Hermanos, we decided to develop an alliance with graphic novelist Edgardo Miranda-Rodriguez, who has worked for large companies such as Marvel, Sony, and Atlantic Records. We are sure that this campaign will contribute to raising awareness about the power of education through the arts and will highlight the work we do every day for the benefit of our communities to continue expanding these offerings, ”said Ignacio Cortés Gelpí, president of Cortés Hermanos, LLC.

“My comic series was created with the intention of uniting the Boricuas (Puerto Ricans) of the diaspora with those of the island, transmitting a central message of love. This alliance with Chocolate Cortés provides a unique opportunity for La Borinqueña to make itself known to both groups simultaneously and on a large scale. My hope is that it will be an important step to share the history of our people with the world”, expressed Edgardo Miranda-Rodriguez.

La Borinqueña is an original comic book character featured in a classic superhero story. This character promotes social values, protecting the environment, and many others that impact our society. As part of the efforts of this campaign, four limited edition chocolate bar wrappers were designed for the Chocolate Cortés bars. Each wrapper contain comic strips where the protagonist is the heroine La Borinqueña. To support this initiative, the Cortés Foundation is sponsoring an exhibit featuring La Borinqueña, where it will present the development and history of this superhero character as well as the social impact it has had.

For more details about this effort, you can visit the website www.chocolatecortes.com.

About Fundación Cortés:
The Cortés Foundation is an initiative that, through the arts and humanities, seeks to promote the strengthening of the values ​​of our people. The Cortés Foundation has started a philanthropic legacy through an active commitment to education that uses the visual arts as an aid to raise awareness about our values, raise awareness about our identity as a people and instill feelings of trust that promote positive and strengthening changes in the spirit of the Puerto Rican and Caribbean community.

About La Borinqueña:
La Borinqueña is an original character and patriotic symbol featured in a classic superhero story created and written by graphic novelist Edgardo Miranda-Rodríguez. Her powers come from the history and mysticism of the island of Puerto Rico. This superhero has superhuman strength, the power to fly and controls storms.