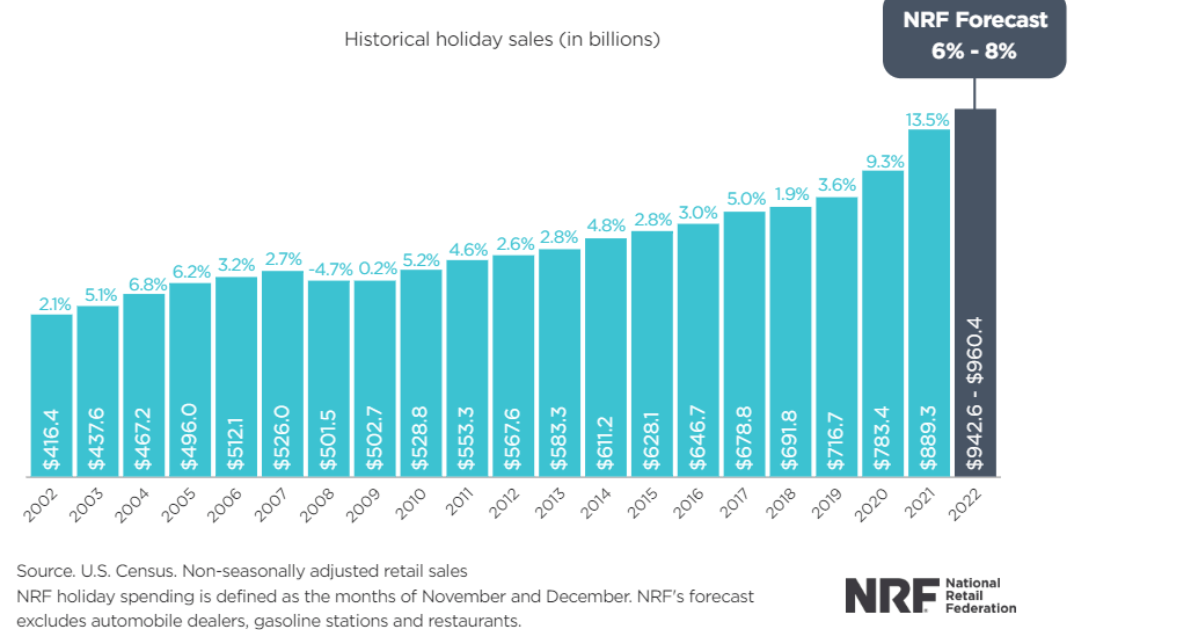 Washington, DC  — Holiday spending is expected to be healthy even with recent inflationary challenges, as the National Retail Federation today forecast that holiday retail sales during November and December will grow between 6% and 8% over 2021 to between $942.6 billion and $960.4 billion. Last year’s holiday sales grew 13.5% over 2020 and totaled $889.3 billion, shattering previous records. Holiday retail sales have averaged an increase of 4.9% over the past 10 years, with pandemic spending in recent years accounting for considerable gains.

“In the face of these challenges, many households will supplement spending with savings and credit to provide a cushion and result in a positive holiday season.”

“While consumers are feeling the pressure of inflation and higher prices, and while there is continued stratification with consumer spending and behavior among households at different income levels, consumers remain resilient and continue to engage in commerce,” NRF President and CEO Matthew Shay said. “In the face of these challenges, many households will supplement spending with savings and credit to provide a cushion and result in a positive holiday season.”

NRF expects that online and other non-store sales, which are included in the total, to increase between 10% and 12% to between $262.8 billion and $267.6 billion. This figure is up from $238.9 billion last year, which saw extraordinary growth in digital channels as consumers turned to online shopping to meet their holiday needs during the pandemic. While ecommerce will remain important, households are also expected to shift back to in-store shopping and a more traditional holiday shopping experience.

“This holiday season cycle is anything but typical,” NRF Chief Economist Jack Kleinhenz said. “NRF’s holiday forecast takes a number of factors into consideration, but the overall outlook is generally positive as consumer fundamentals continue to support economic activity. Despite record levels of inflation, rising interest rates and low levels of confidence, consumers have been steadfast in their spending and remain in the driver’s seat.”

“The holiday shopping season kicked off earlier this year – a growing trend in recent years – as shoppers are concerned about inflation and availability of products,” Kleinhenz said. “Retailers are responding to that demand, as we saw several major scheduled buying events in October. While this may result in some sales being pulled forward, we expect to see continued deals and promotions throughout the remaining months.”

Kleinhenz’ comments mirror NRF’s consumer data, which shows that consumers have been kicking off their holiday shopping early over the last decade in order to spread out their budgets and avoid the stress of holiday shopping. This year, given concerns around inflation, 46% of holiday shoppers said they planned to browse or buy before November, according to NRF’s annual survey conducted by Prosper Insights & Analytics. Still, consumers plan to spend $832.84 on average on gifts and holiday items such as decorations and food, in line with the average for the last 10 years.

NRF expects retailers will hire between 450,000 and 600,000 seasonal workers. That compares with 669,800* seasonal hires in 2021. Some of this hiring may have been pulled into October as many retailers are eager to supplement their workforces to meet increased consumer demand.

While retailers face a multitude of challenges, one is totally out of their hands. Weather, as always, plays a role in holiday retail sales. The National Oceanic and Atmospheric Administration is forecasting warmer-than-average temperatures for the Southwest, Gulf Coast and Eastern Seaboard, which cover a large swath of the U.S. population, but wetter and snowier conditions are expected for parts of the northern tier.

NRF’s holiday forecast is in line with the organization’s full year forecast for retail sales, which predicted retail sales will grow between 6% and 8% to more than $4.86 trillion in 2022.

About NRF
The National Retail Federation, the world’s largest retail trade association, passionately advocates for the people, brands, policies and ideas that help retail thrive. From its headquarters in Washington, D.C., NRF empowers the industry that powers the economy. Retail is the nation’s largest private-sector employer, contributing $3.9 trillion to annual GDP and supporting one in four U.S. jobs – 52 million working Americans. For over a century, NRF has been a voice for every retailer and every retail job, educating, inspiring and communicating the powerful impact retail has on local communities and global economies. nrf.com