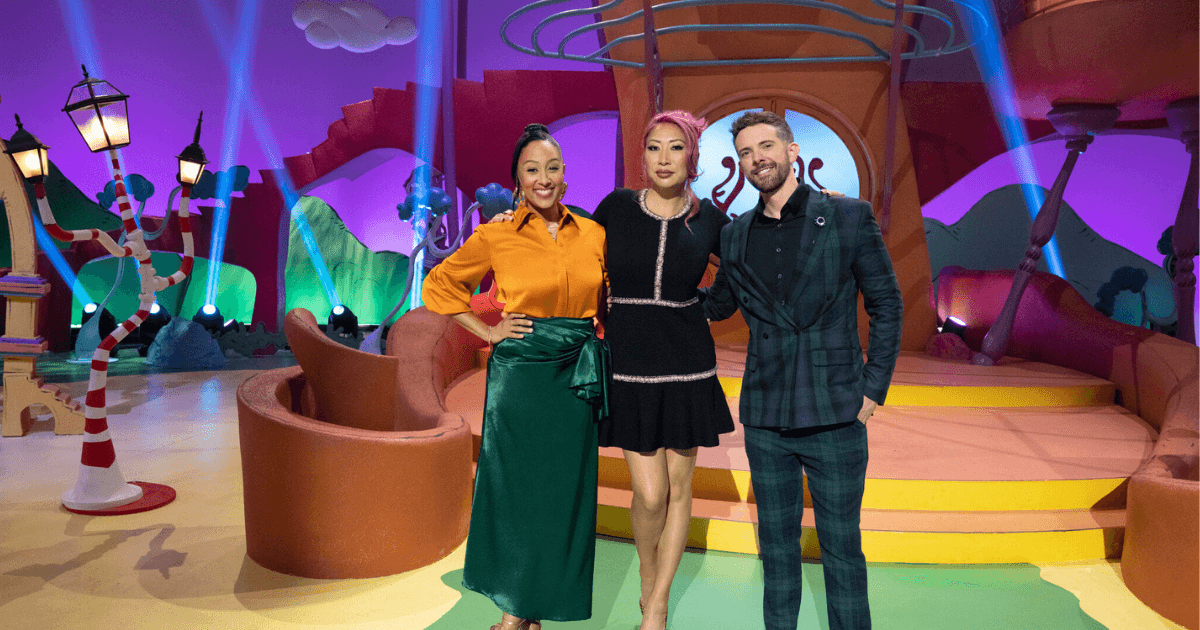 Culver City, CA — Prime Video announced the host and judges for Dr. Seuss Baking Challenge. The series will be hosted by actress, producer, and Emmy award-winner Tamera Mowry-Housley, with critically acclaimed pastry chef Clarice Lam and accomplished cake designer and pastry chef Joshua John Russell as judges. The series will premiere on Prime Video in more than 240 countries and territories worldwide this winter.

Dr. Seuss Baking Challenge invites America’s best bakers to step into the world of Dr. Seuss. From The Grinch to The Cat in the Hat, these bakers will use their limitless imaginations to craft jaw-dropping creations inspired by beloved Dr. Seuss characters. Hosted by Tamera Mowry-Housley, in each episode bakers will be given a challenge based around Seuss characters and stories, and their towering creations will be judged by Clarice Lam and Joshua John Russell based on taste, creativity, and storytelling.

Meet the Host and Judges

Tamera Mowry-Housley is an Emmy award-winning host, actress, producer, and entrepreneur who has captivated audiences for over 20 years. Tamera started her career in Hollywood alongside her sister, Tia, on the hit show Sister, Sister, which aired over 100 episodes from 1994-99. She returned to the screen with Tia on the hit Style Network reality TV series Tia and Tamera. Tamera co-hosted the talk show The Real for six seasons, and in 2018, she and her co-hosts won a Daytime Emmy for “Outstanding Entertainment Talk Show Hosts.” She was also the host of Hulu’s baking competition series Baker’s Dozen, and served as a judge alongside Martha Stewart and Chris Hessney on HGTV’s design competition show, Table Wars.

Tamera has starred in and executive produced original films for Hallmark Media, including hit holiday television movies A Christmas Miracle, Christmas Comes Twice, and The Santa Stakeout. She was also a series regular on ABC Family’s Strong Medicine, Roommates and Melissa & Joey. Tamera has also voiced characters in the FOX hit Family Guy and Cartoon Network’s Super Hero Squad Show. She also produced and starred in the Lifetime movie Double Wedding. On the big screen, Tamera co-starred in the Rob Schneider comedy The Hot Chick.

Born in Germany and raised in Southern California, Tamera graduated with Honors from Pepperdine University with a Bachelor’s degree in psychology with an emphasis on abnormal childhood development. Tamera and her husband, journalist Adam Housley, reside in Napa Valley with their two children, Aden and Ariah. Tamera and Adam oversee Century Oak Winery and also opened their own award-winning tasting room, Housley Napa Valley, and coffeehouse, Barnhouse Napa Brews. They feature six brews of coffee at the shop, all of which are locally brewed and sourced and grown sustainably from all over the world. 90% of the food and products available for sale are women and minority-owned.

Clarice Lam is a critically acclaimed pastry chef. Born in Toronto and raised in Los Angeles by her parents who emigrated from Hong Kong, Clarice previously pursued a career in modeling, which gave her the opportunity to travel internationally for over a decade while living in the UK, France, Hong Kong, The Philippines, Mexico, Spain, South Africa, and Italy. Her time in Paris ignited a deep appreciation for the world of French pastry. While living in Italy, she attended Le Cordon Bleu where she took courses in Italian cuisine.

After retiring from modeling, she returned to the U.S. where she studied at The French Culinary Institute and graduated with a Grand Diplôme in Classic Pastry Arts. Clarice built her foundation in critically acclaimed establishments including Thomas Keller’s Bouchon Bakery, Jean-Georges Vongerichten’s Spice Market, and as the executive chef at The Chocolate Room in Brooklyn.

In 2012, Clarice opened Brooklyn-based The Baking Bean, a direct-to-consumer bakery specializing in all-natural, seasonal desserts and confections. In 2020, when the global pandemic hit, Clarice put The Baking Bean on hold and joined Rivers and Hills Hospitality Group as the opening pastry chef for Kimika, an Italian-Japanese restaurant in Nolita.

Additionally, Clarice is on the Pro Advisory Committee at ICE (Institute of Culinary Education), a freelance contributor at The Spruce Eats, Epicurious, and Food & Wine, and chef ambassador for Mondelez International after winning the 2021 nationwide Oreo recipe contest, Hope and Sesame, and Yakult. She is also an affiliate partner for Chrissy Teigen’s lifestyle brand, Cravings, and is currently working on her first cookbook.

Joshua John Russell is an accomplished pastry chef and cake designer from Atlanta. He graduated in 2002 from Johnson & Wales University and started his career as a pastry chef at the famous Grove Park Inn in Asheville, North Carolina. Joshua made a name for himself appearing on 15 episodes of Food Network Challenge (winning five) and all six episodes of Last Cake Standing, as well as local media and TV outlets. His work has been featured in books such as Decadent Details, and magazines including Jezebel, Atlanta Weddings, Flavors, 944, Life and Style, and Grace Ormonde as well as national ad campaigns.

In addition to being a pastry chef, Joshua has food-styled for Focus Brands, Sweetex, and had his work featured in several TV shows and movies. Joshua’s endeavors as an instructor at Craftsy.com has produced worldwide attention with a student base spanning the globe.

In 2015, Joshua was named one of the top ten cake designers in North America by Dessert Professional Magazine, as well as Johnson & Wales University’s Distinguished Visiting Chef. His name in the business and success in the field has also prompted Joshua to be asked to judge cake shows and baking competitions, including the Austin Cake show, Viking Cooking School, Share Our Strength, Top Chef Jr., and Nailed It. Joshua hosted the NBC YouTube show Man About Cake. He currently works as a corporate pastry chef for Irca in Atlanta and hosts You’ve Been Desserted.

Dr. Seuss Enterprises is a leading global children’s entertainment company focused on promoting literacy, education, self-confidence, and the wonderful possibilities of a child’s imagination through the works of Dr. Seuss. The company was established in 1993 and is based in San Diego, California. Global endeavors include publishing, film, TV, stage productions, exhibitions, digital media, licensed merchandise, and other strategic partnerships. For more information about Dr. Seuss Enterprises, visit Seussville.com, or follow on Instagram.

Prime Video offers customers a vast collection of movies, series, and sports—all available to watch on hundreds of compatible devices.

Prime Video is just one of many shopping, savings, and entertainment benefits included with a Prime membership, along with fast, free shipping on millions of Prime-eligible items at Amazon.com, ultrafast grocery delivery and pickup, unlimited photo storage, exclusive deals and discounts, prescription savings, and access to ad