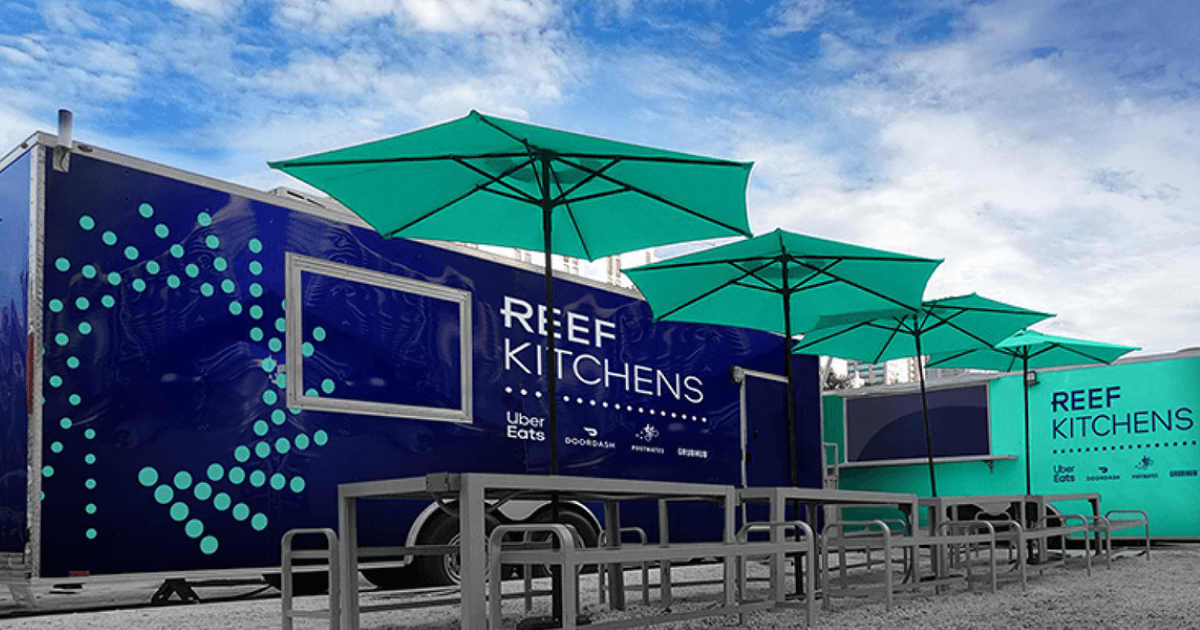 The growing array of so-called ghost kitchens are providing a new addition to restaurants’ menus.

For restaurants that have been closed or operating with reduced seating capacities during the pandemic, ghost kitchens have provided a lifeline, preparing meals – delivered via third-party apps such as Door Dash, Postmates and others — and fostering the restaurants’ brand with customers eating in their own dining rooms.

Parking Lots For Food Prep
For example, Reef Technology, which began life as a company that provides hardware, software and management services to parking lots, shifted some of its business to leasing a portion of the lots to install kitchen trailers to prepare delivery meals for 4-6 brands. In most cases, Reef has a revenue sharing agreement with the restaurants; BurgerFi, which has 125 brick-and-mortar locations is one of its largest customers. Reef has about 100 trailers spread across the U.S. But it manages 4,800 parking lots and garages with a goal of expanding to 10,000, says Founder and CEO Ari Ojalvo. In addition to BurgerFi, Reef also is working with, among others, I Heart Mac and Cheese and Wow Bao.

Reef isn’t alone in its ambitions. Zuul, which has focused on New York restaurants such as Stone Bridge Pizza, Junzi and Sarge’s Deli, is expanding along with the likes of Kitchens United and Uber Founder Travis Kalanick’s CloudKitchens, which has spent $130 million acquiring more than 40 properties in places such as Portland, OR, Nashville, Las Vegas and Columbus, OH. Dallas-based Dickey’s Barbecue Pit , which is represented in licensing by Global Icons, also signed an agreement with Seikou Co. in December to open two branded ghost kitchens in Tokyo this year, building on a concept the 500-store chain launched last August.

“All of these ghost kitchens have different approaches and there are advantages to all of them, but the most important thing is the brand’s connection, which is the digital customer portal,” says Megan Wintersteen, VP of Marketing at restaurant technology provider Zenreach. “That experience becomes very important and if you are going with an existing brand name, you want that experience within the app to reflect your reputation and credibility within the brand equity. That is the key to success.”

Testing Markets and Menu Items
Beyond using ghost kitchens to stay afloat during the pandemic, some restaurants are using them to test their brands in new markets before investing in leases and buildouts of physical locations. With Reef, for example, BurgerFi expanded virtually via delivery last year to new markets such as Houston, Minneapolis, Nashville, and Seattle.  The kitchens also are used to try out new food items before adding them to the menu in physical locations.

“If you are managing the menus digitally” through ghost kitchens “you can change them on a whim and be flexible and adjust to the market in real time based on the results you are seeing,” says Wintersteen. “The food is being prepared more quickly than at a traditional restaurant and the ghost kitchen model works whether you are starting one with a chain brand or just trying to raise some awareness and credibility” of your own brand in a new market.

That raising of awareness can also allow restaurant operators to experiment with new brands of their own, be they licensed or built from scratch. For example Dog Haus, which has 50 brick and mortar restaurants, formed Absolute Brands to focus on ghost kitchens and has rolled them out virtually via Kitchens United and CloudKitchens under names such as Bad Mutha Clucka (chicken sandwiches), Plant B (plant-based proteins, toppings and sides) and Bad-Ass Breakfast Burritos (soft flour tortilla burritos).

In New York, the barbeque restaurant Mighty Quinn licensed the Otto’s Tacos brand  in late November after the latter closed its three locations. The move gave Mighty Quinn entry into a Mexican food delivery business, which it operates out of one of its New York restaurants. And Zuul introduced software earlier this year that allows a ghost kitchen to produce and deliver meals from multiple restaurants to single locations like apartment and office buildings.

“It is extremely important to capitalize on delivery by maximizing the use of virtual kitchen spaces,” said Dog Haus Co-Founder Hagop Giragossian. Virtual kitchens are headed in a positive direction and we see a future in this space as we launch new concepts and test popular items. Ultimately the goal with virtual kitchens is to reach a wider audience.”