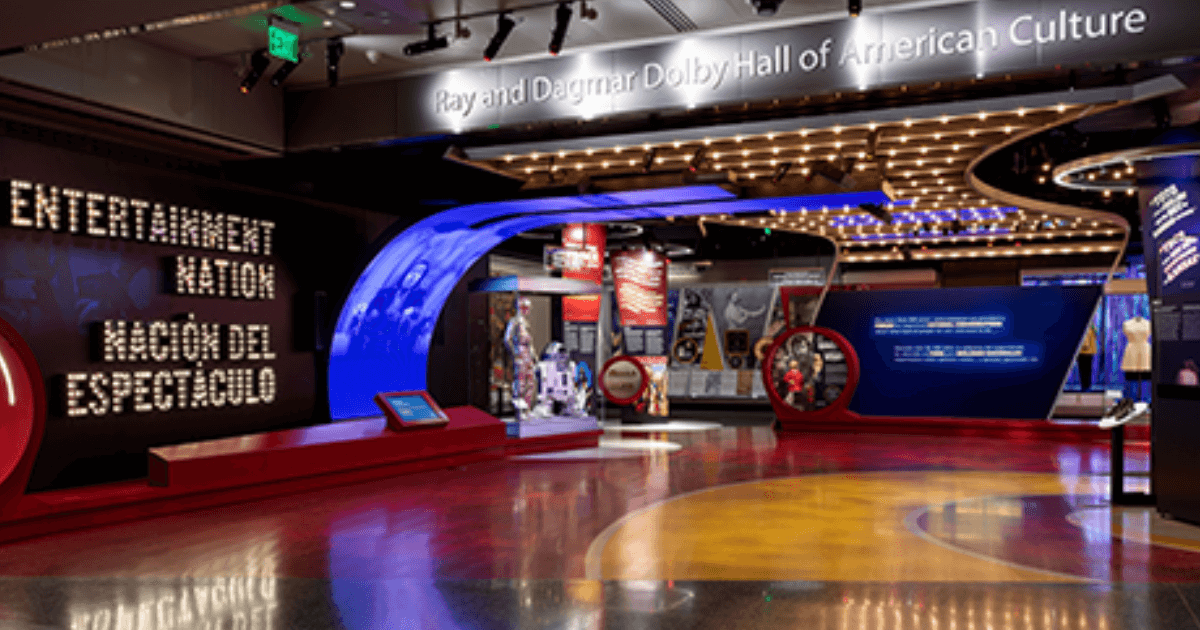 From its red-carpet entryway to a yellow brick road, the new “Entertainment Nation”/“Nación del espectáculo,” exhibition opening Dec. 9 at the Smithsonian’s National Museum of American History, will immerse visitors in the dramatic arc of the nation’s story as told through the power and influence of theater, television, film, music and sports. With approximately 200 objects, the 7,200-square-foot, multimedia exhibition in the Ray and Dagmar Dolby Hall of American Culture will be the Smithsonian’s first dedicated exploration of entertainment history. It will also be the largest long-term bilingual exhibition on the National Mall. Through iconic objects from the museum’s renowned collection and graphics, video and compelling stories, “Entertainment Nation”/“Nación del espectáculo” will showcase how Americans have long used entertainment to both elicit delight and understand different viewpoints.

Audiences will be captivated by objects from culture makers such as Muhammad Ali and Ali Wong who broke barriers, Tejana singer Selena, Star Wars’ C-3PO and R2-D2 and the enduring magical pull of the Ruby Slippers and the charm of the first Muppets. State-of-the-art Dolby Atmos immersive surround sound will enhance the experience through a custom playback system designed to transport museum visitors into the exciting world of the movies.

“The power of American entertainment lies in the rich diversity and power of its voices,” said Anthea M. Hartig, Ph.D., the museum’s Elizabeth MacMillan Director. “For generations, entertainers and athletes have used their platforms to reveal and respond to the nation’s many struggles, challenge injustice and create change. As the nation’s flagship and largest history museum, we are poised to help audiences better understand the value, role and influence of entertainment as most broadly defined.”

More than a dozen objects spotlight cases, including one with the Ruby Slippers, are designed to highlight compelling examples of how entertainment has shaped important conversations about society and politics.

Visitors to the open-concept gallery can examine how various types of entertainment, from the 19th century to the present, provoked conversations. Three “micro-galleries” within the space will illuminate complex topics on comedy, music and television through artifacts and multimedia.

Designed by Reich & Petch and fabricated by the museum, the gallery features twinkling marquee lighting, large continuous casework along the perimeter with a chronological and thematic presentation of entertainment history and media screens that cascade upwards onto the ceiling, stretching the length of the gallery to meet in a media spectacle on the big screen.

Numerous accessible features are throughout the gallery including open captions for all media programs, assistive listening in two of the micro galleries and at the entrance experience as well as visual descriptions in English and Spanish via QR codes that visitors may access using their own personal devices. There are six bronze touchable models (made from 3D scans) that visitors can also interact with through visual descriptions and QR codes. Five are actual-size models, including the Ruby Slippers, Gertrude Ederle’s swim goggles, a “Miracle on Ice” hockey glove, Nipsey Hussle’s chains and pendants and a Wurlitzer tabletop jukebox. There is also a reduced-size bas relief in bronze of a circus poster on display. Navigation touch pads are available on the kiosks in front of five object cases that are part of the micro galleries on comedy, music and television. A vivid replica of Prince’s “Yellow Cloud” guitar provides visitors with a photo opportunity in front of the spotlight case of the actual guitar he used in Purple Rain. The exhibition’s companion website will be expanded following after the opening with extensive and fully bilingual content. The companion book, Entertainment Nation, expands on the exhibition and is an overview of the most iconic, controversial and celebrated moments in pop culture history with nearly 225 objects and enriching essays. It was co-edited by Kenneth Cohen and John W. Troutman and published by Smithsonian Books.

Through incomparable collections, rigorous research and dynamic public outreach, the National Museum of American History seeks to empower people to create a more just and compassionate future by examining, preserving and sharing the complexity of our past. The museum, located on Constitution Avenue N.W., between 12th and 14th streets, is open Friday through Tuesday between 10 a.m. and 5:30 p.m. Admission is free, and passes are not required. The doors of the museum are always open online and the virtual museum continues to expand its offerings, including online exhibitions, K–12 educational materials and programs.

Kroeger Inc. Expands Halloween Costume Sales and Distribution With Jazwares to Include the United States Mid-Tier and Specialty Market