As eCommerce and social commerce capture an increasing share of consumer purchase, the battle against counterfeit goods is extending from seizing container and plane loads of products to much smaller shipments. It’s an adjustment that brings into play new tracking and detection technologies, along with greater collaboration among law enforcement, brand owners, licensees and ecommerce platforms to detect them.

While DTC shipments from ecommerce websites come in all shapes and sizes, the smaller versions – “e-packets” weighing less than four pounds – are proving especially daunting, amid growing realization among counterfeiters that, compared to large shipments, there’s less risk involved and lower penalties if they’re caught.

To be sure, investigating and taking down sites selling counterfeit products remains a game of whack-a-mole — when one’s removed, another springs up. “The challenge,” says Bill Patterson of Op Sec Security, “is covering the different marketplaces, auction sites and social media platforms. That requires companies to collect data from a variety of marketplaces and pull it into a platform that allows licensors to go over it in a way that isn’t overwhelming” and can ferret out the counterfeit products.

The business of counterfeit goods, and its effect on legitimate brands and products, is growing. According to a report released earlier two months ago by the London-based Orginasation for Economic Co-Operation and Development (OECD) and the European Union’s Intellectual Property Office, the value of imported fake goods worldwide (based on 2016 customs seizure data) at US$509 billion (3.3% of world trade), up from US$461 billion in 2013 (2.5% of world trade).

The report also notes that “Small parcels sent by post or express courier are a prime and growing conduit for counterfeit goods. Small parcels accounted for 69% of total customs seizures by volume over 2014-2016 (57% via post and 12% via courier), up from 63% over the 2011-2013 period.” 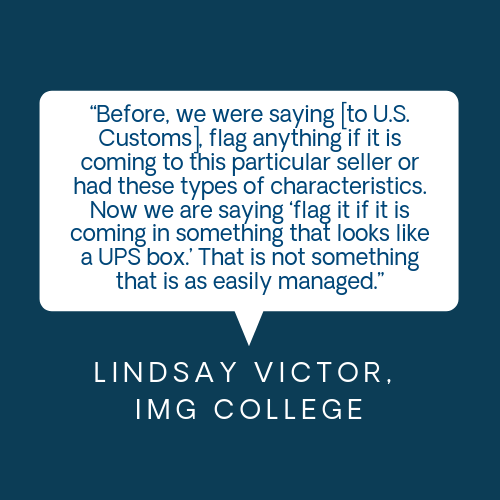 That increases the complexity of tracking and interrupting the flow of goods. “Before you could track a container and seize thousands of goods at a time. Now it is basically a flurry of small packages that are getting sent through, not these big ships, but through UPS, DHL and the U.S. Postal Service,” says IMG College Senior Counsel Lindsay Victor.  “That is a lot more difficult, because now we are talking about millions of packages rather than container ships trying to get into a country. Before, we were saying [to U.S. Customs], flag anything if it is coming to this particular seller or had these types of characteristics. Now we are saying ‘flag it if it is coming in something that looks like a UPS box.’ That is not something that is as easily managed.”

The strategy is as much to disrupt the process as it is to seize goods, says Steven Shapiro, the FBI Unit Chief of Intellectual Property Rights, who heads the multi-agency National Intellectual Property Rights Coordination Center in Washington, DC. “The goal remains to get the source, but there are the points along the way, and any disruption we can make in this process adds one more barrier” to selling counterfeits.

Another disruption can come in the flow of payments. For example, the International Anti-Counterfeiting Coalition (IACC) recently worked with MasterCard International to shut down the ecommerce site iOffer by cutting off its payment processing that was used to sell a range of counterfeit goods, at cut-rate prices. It’s part of IACC’s RogueBlock program which includes payment processing companies such as PayPal, MasterCard, Visa and others that work with counterfeit investigators.

Of course, lawsuits – IMG is about to file a 16th version of one that was first filed in 2013 in U.S. District Court, Chicago, to add new defendants – also are a major weapon. The suits frequently gain default judgements (when defendants don’t respond) within eight weeks, allowing the brands involved to get ownership of the offending domain name and access to any funds remaining in merchant accounts.

“A follow-the-money approach is always effective, because generally hundreds of sites are processed through the same merchant account, so that when you take one down you affect a significant amount of online counterfeit sales because the site can’t accept credit cards,” says Lara Miller, counsel and director of strategic planning at the IACC. In the case of iOffer, it re-appeared, but with less functionality, Miller said.

The flip side of counterfeit detection is authentication of legitimate products, where technologies such as RFID tagging – with tags sewn into garments themselves — and blockchain are playing increasing roles.

Authenticity is a key element of the sports and entertainment memorabilia business, and authentication technology is playing a growing role there. At its Rookie Premier event this week, NFL Players Inc. will showcase a blockchain-based system (being tested with Fanatics jerseys and Panini trading cards) that would catalog digital images of authentic goods to be uploaded via an app to a distributed ledger, and tracked across the supply chain.

“We want to make sure this is seamless and integrated into the actual process,” says Casey Schwab, VP for Business and Legal Affairs for NFL Players Inc. “We want to be starting within the plant rather than starting outside of it and trying to form fit it in.”

Of course, a major concern among brand owners and their licensees are the major online platforms and their marketplaces, and the major sellers such as Amazon and Alibaba have more overtly acknowledged the need to be vigilant.

Amazon, for example, for the first time spotlighted counterfeiting in its recent annual report, listing it among the “risk factors” it faces. Earlier this year, Amazon launched Project Zero, a program that features a new tool that allows some sellers to automatically remove counterfeit goods without Amazon intervening. Previously brands had to report counterfeits to Amazon before the ecommerce giant investigated and took action. Project Zero is currently invite-only, but brands can sign up to be put on a waiting list to join.  Amazon has 2.5 million independent dealers in its Marketplace, who sell more than half the goods purchased on the site. 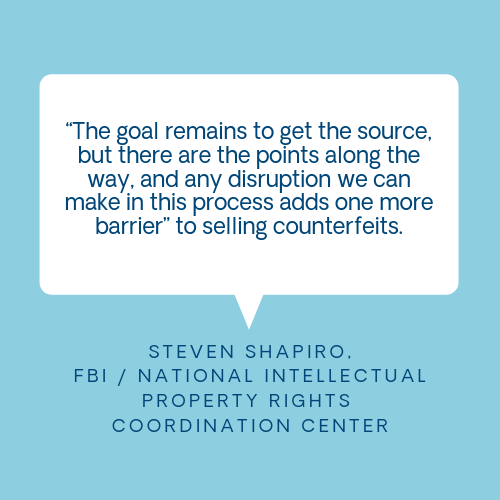 The Amazon effort acknowledges a problem that brand owners have long complained about. For example, the American Apparel & Footwear Association last fall recommended that some Amazon marketplace sites should be added to the Notorious Markets list — compiled annually by the Office of the U.S. Trade Representative – because of their sales of counterfeits. But Amazon in a statement said that it “strictly prohibits the sale of counterfeit products and invests heavily – both funds and company energy – to ensure our policy against the sale of such products is followed.”

For its part, China’s Alibaba created an IP Protection portal for brands to register their trademarks and the company says that last year, it handled 96% of takedown requests within 24 hours of their being filed. It also uses real-time scanning technology that allows it to remove 96% of suspected counterfeit listings before a sale is made, says Matthew Bassiur, Group VP and Head of Global IP Enforcement.

Alibaba moved late last year to consolidate IP enforcement across its sites into one group. Earlier, it had formed the Alibaba Anti-Counterfeiting Alliance that now has 130 rights holders (up from an original 30), including Apple, Ford, Samsung, Louis Vuitton, Mars and others, to work through the counterfeiting issue.

“At the heart of these programs is collaboration” with brands, governments, industry associations and academia,” says Bassiur. “Alibaba believes that without a collaboration approach, there can be no effective or sustainable solution” to counterfeiting.

Those efforts have begun to bear fruit. In early March, it struck a broad agreement with the National Basketball Association (NBA) both for live streaming of games and highlights as well as the sale of licensed merchandise through the company’s T-Mall and Taobao marketplaces. It also aligned with IACC’s MarketSafe program that is designed to speed the registration process and reduce evidence requirements in enabling the quicker takedowns of websites.

“There is an increasing awareness among brand owners and platforms in general that the fan experience is really important to sustain growth and sales” — something that counterfeit goods can sometimes alter, says Anil George, VP and Assistant General Counsel for Intellectual Property at the NBA. “That has to be a strong factor that these [online] companies are looking at and the fact that we have a partnership allows us to focus on counterfeiting.”

That focus also is extending to social commerce – the spread of which has lowered the barrier to entry for counterfeit goods and requires near-constant monitoring, says Lindsay Victor of IMG College.

“[Sellers of counterfeits] can pick — based on profiles and preferences — exactly what the user wants to see. What makes that difficult from an enforcement perspective is that not all users see the same advertisements,” says Victor The number of takedowns involving sponsored ads that IMG has executed grew to 30,000 in 2018, up from 3,500 five years ago, Victor said.

“Counterfeiters are increasingly taking advantage of [fans’] emotional impulse to get [them] to buy as quickly as possible” without considering whether the products being purchased are counterfeit, says Op Sec’s Patterson.