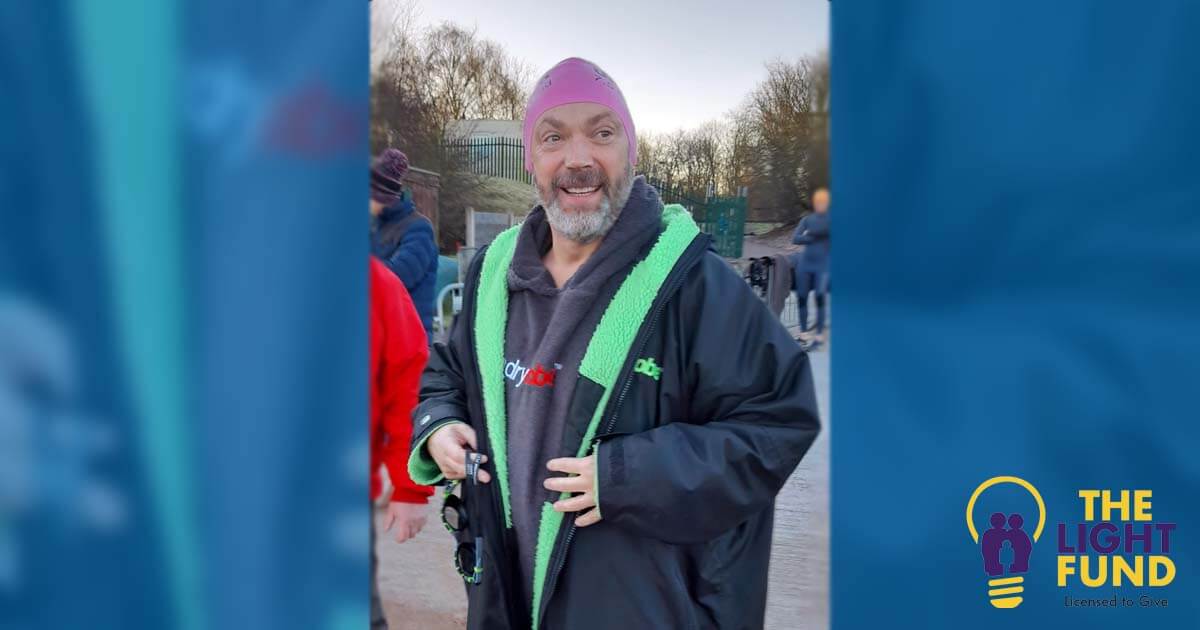 With this year’s Light Fund Channel relay fundraiser only a matter of months away, one of the two team captains, Stephen Gould, has been warming up (if that’s the correct term) with an Ice Mile.

That’s right: a one-mile swim in near-freezing temperatures in the middle of January. He completed the Ice Mile at Hatfield Lake in Doncaster in water temperature of 4.4°C and air temperature of -0.5°C. Only 434 people worldwide have achieved a similar feat (more people have been in space) – and very few of them were in their late 50s (sorry Stephen). In fact, Stephen is the third-oldest person from the UK to successfully complete an Ice Mile.

Stephen, who has been swimming competitively since he was eight and became an open water swimmer at the age of 21, has gained a reputation for cold water swimming. In fact, he is known to his team as Wee Hof after Wim Hof (aka the Iceman), an extreme athlete noted for his ability to withstand freezing temperatures. To date Stephen has literally dozens of open water competitions under his belt, including the Thames Marathon, Ullswater, Coniston, Jersey to France and two Channel relays. Now that tally includes the notorious Ice Mile.

But he didn’t just do it for fun. His Ice Mile also helped to raise donations towards this year’s Light Fund target of £250,000, which will be shared by the RNLI and a number of other organisations and projects supported by the charity inspired, and run, by the licensing industry. Stephens’s dedicated Just Giving page for the Ice Mile can be found here.

Other fundraising initiatives – including a highly recommended swimming-themed limited edition beer – have taken the Light Fund over halfway to its target. But there’s still a long way to go.

Which brings us to the main event. This summer, on a day between the 30th of June and the 3rd of July when the weather conditions are right, two boats of six swimmers will be racing each other across the English Channel to France in aid of The Light Fund charity. All the participants will be from the licensing industry, trying to be first to make it from Dover to the French coast.

The teams are all fit, enthusiastic swimmers, but this is no ordinary swim. France may be ‘only’ 21 miles away but that could end up closer to 40 miles if you include tidal shifts.

So the teams are undertaking a tough training schedule, which you can follow at The Light Fund’s Just Giving page and on its Instagram feed.

The Just Giving page is also the place to make a donation. However, if you or your company want to make an even bigger splash (pun intended) you can find out more about corporate sponsorship options here.

As Stephen Gould says: “The Ice Mile was a great warm-up, but the next swim will be a lot longer, so we’re training like mad already – as you can find out on Just Giving and Instagram. But however you follow the progress of the teams, do please make a donation to some wonderful causes – and wish both teams luck!”

About The Light Fund
The Light (Licensing Industry Giving Help Together) Fund was born when a group of like-minded people from the UK licensing industry came up with the idea to form a committee to help those less fortunate than themselves. The Light Fund is a registered charity, which raises monies to fund worthwhile charity projects that help children, women and men. Since its inception, back in 2004, The Light Fund has raised over £1.7 million and funded hundreds of different charity projects.
https://www.lightfund.org