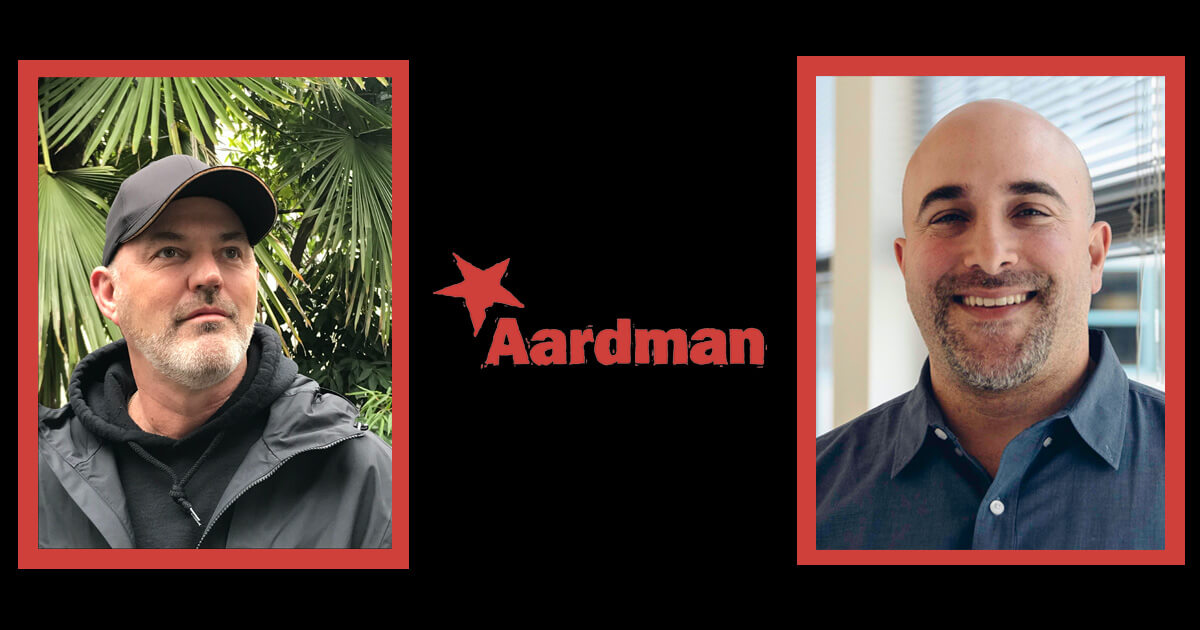 The award-winning animation studio hires new CTO and Head of Stop Frame Production as it continues to expand its creative capabilities across a range of media.

These newly created roles support the continued development of cutting-edge techniques and innovations as the studio builds on recent successes including the Academy Award-nominated Robin Robin. Major new titles are entering production for both new and established IP, including a sequel to Chicken Run and the return of Wallace & Gromit.

Steven Shapiro will start as Chief Technical Officer on 28th March, overseeing the technology teams and developing a technology strategy reflecting the long-term plans of the studio as it takes on an ambitious slate of projects over the next five years. He will also play a key role as Aardman hones its creative skills bringing character, story and craft to opportunities enabled through new platforms and emerging technologies.

Shapiro joins Aardman from The Walt Disney Studios where, as Principal Architect, Motion Picture Innovation, he focused on applying innovation to support productions across all The Walt Disney Pictures live action studio banners, from Marvel Studios to Disney Live Action MPP (Motion Picture Productions). Prior to this, he helped build the Production Technology team at Marvel Studios in his role as Director. He has more than 20 years of experience in media and entertainment

technology, working on more than 30 features and episodics, managing teams and contributing in the areas of visual effects, gaming, image and colour pipelines, stereography and conversion, finishing, FX art and more.

Harry Linden joined the studio as Head of Stop Frame Production on 14th March. He will support Aardman’s specialist teams to deliver an expanding stop frame slate which includes feature films, shorts, specials, and series. The slate also includes commercials and content produced for partners, such as Turtle Journey (2020), developed for Greenpeace to show the impact of climate change and pollution on marine life, and the music video for Coldplay’s Daddy, made by Aardman in 2019. Linden will work closely with the Head of CG Production, Jess McKillop, to ensure an integrated approach across all techniques as well as collaborating with producers and production teams to ensure this content is delivered to the highest creative standards.

Linden has worked in film and TV for 25 years across advertising and promos, trailers, series and features. His experience spans live action and animation, 2D and 3D, stop motion and CG, at all levels of budget. He first collaborated with Aardman as Floor Manager on Wallace and Gromit: A Close Shave (1995), before working with the studio again on its first feature, Chicken Run (2000) as Production Manager. He worked on Tim Burton’s Corpse Bride (Warner Bros, 2005) as Production Manager and was Line Producer on Coraline (LAIKA, 2009).

Together, the appointments of Shapiro and Linden bolster the cutting-edge animation work produced at Aardman, enabling further development of skills, processes and techniques to maintain Aardman’s position as a creative leader in entertainment over the coming years.

“This is an exciting time for Aardman. We have an ambitious slate over the next five years and it is crucial that we continue to lead in the industry in relation to technology and our production planning to do justice to the stories we want to tell. The hiring of Steve and Harry will bolster our continued development and strategic planning around the future use of new techniques and innovations, alongside effective oversight around production planning across all areas of the studios business. Their appointments represent the next phase in a hugely exciting period for the studio, and I look forward to seeing the results of their contributions in the years to come.”

These appointments come following a successful 2021 for the company, from the announcement of a new Wallace & Gromit film to the studio’s partnership with leading games publisher Bandai Namco to develop new cross-media IP, driven by a shared vision on the future of entertainment.

About Aardman
Aardman, an employee-owned company, is based in Bristol (UK) and co-founded in 1976 by Peter Lord and David Sproxton, is an independent and multi-Academy Award® and BAFTA® award winning studio. It produces feature films, series, advertising, games and interactive entertainment – current animated productions include; 2021 holiday specials Robin Robin and Shaun the Sheep: The Flight Before Christmas, CGI series Lloyd of the Flies, a new stop motion series for pre-schoolers The Very Small Creatures, feature length sequel Chicken Run: Dawn of the Nugget and a brand new Wallace & Gromit film for 2024.

Its productions are global in appeal, novel, entertaining, brilliantly characterised and full of charm reflecting the unique talent, energy and personal commitment of the Aardman team. The studio’s work – which includes the creation of much-loved characters including Wallace & Gromit, Shaun the Sheep, Timmy Time and Morph – is often imitated, and yet the company continues to lead the field producing a rare brand of visually stunning content for cinema, broadcasters, digital platforms and live experiences around the world. Recent celebrated projects include the ‘visually astonishing’ (Guardian), BAFTA® nominated console game, 11-11: Memories Retold, the four-times Gold Cannes Lions-winning StorySign app, AR experience Wallace & Gromit: The Big Fix up – and innovative attractions for both the domestic and international market, including a 4D theatre attraction at Efteling in the Netherlands.