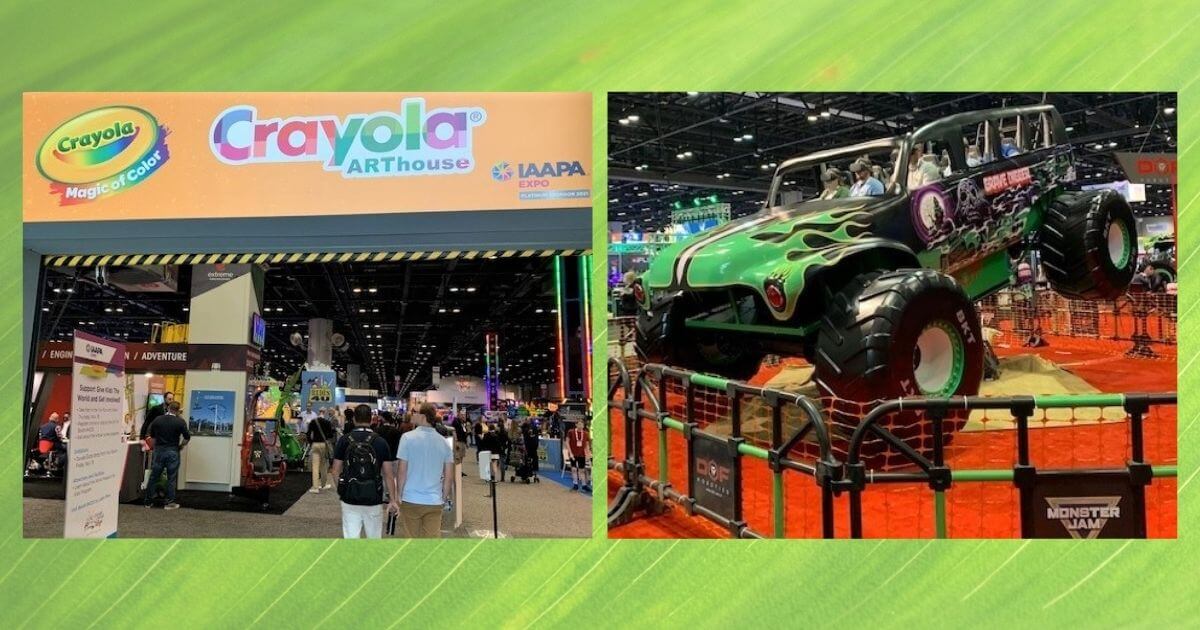 As the theme parks and family entertainment centers that are the core business of much of its constituency have begun to return toward their formal level of operation, last week’s IAAPA (International Association of Amusement Parks and Attractions) Expo stood as a first step toward a return to normalcy. The number of attendees (more than 28,000 over five days) was two-thirds the 2019 total, and the number of exhibitors (878) was off 23%. But that reduction, in the words of one attendee, led to “more meaningful conversations with more meaningful existing and potential partners.”

Disruption, but new opportunities
While the pandemic created a major disruption for theme parks, their suppliers, and the lengthy timelines in which big attractions are developed, it also has freed up some shorter-term opportunities, particularly in malls and shopping centers that are looking for ways to lure e-shoppers out from behind their keyboards with experiential attractions.

Among the ventures on Crayola’s drawing board, for example, is Magic of Color, a freestanding interactive exploration of the links between color and cultures designed for mall placements.

“It’s a reflection of the way the industry is going; a lot of it is seeing a drop of mall traffic, but it’s also about seeing the value of the experiences,” said Craig Herman of Peanuts Worldwide, which along with Crayola was an Expo sponsor. “It’s not just filling a gap; it’s seeing opportunity in a way maybe they didn’t before.” Though no brand owners were exhibitors, we saw licensing executives from companies including Hershey, Sony, Lionsgate, CBSViacom, Microsoft and Rovio in and around the Expo.

Crayola launched a multifaceted LBE campaign, most notably to license its Crayola Experience FECs; it has owned and operated five of them around the U.S., but now has begun meeting with potential partners to license the concept both domestically and internationally.

The company also is developing strategies to expand its traveling “Crayola IDEAWorks: The Creativity Exhibition” that’s finishing up a 10-month run at the Franklin Institute in Philadelphia at the end of this week; a venue for 2022 will be announced soon, and touring installations also are envisioned for other parts of the world. There also are plans for an adult-targeted Crayola ArtHouse venture designed to be launched in cities with significant art communities.

Monster Jam simulator
DOF Robotics staged the public debut of its Monster Jam Grave Digger dynamic VR simulator – the result of a four-year development process with Feld Entertainment. Feld’s Jeffrey Bialosky said that while a 12-seat version was being demoed on the show floor, it’s more likely that it will be sold in a six-seat configuration with a smaller footprint.

All those projects, of course, are focused on the future, as are the venues that will host these attractions. Said Jim Seay, President of Premier Rides, which builds licensed and unlicensed rides for amusement parks: “Even though the pandemic persists, people are still focused on the business, investments and the anticipation that the business will be strong. People are expecting that while next year won’t be absolutely normal, and there will still be focus on safe environments and people will want to be in the parks, the efforts that have been done to make the parks safe has translated into the strong business” that already is in evidence.

Crayola Positions Itself for Growth within the Location-Based Entertainment Industry