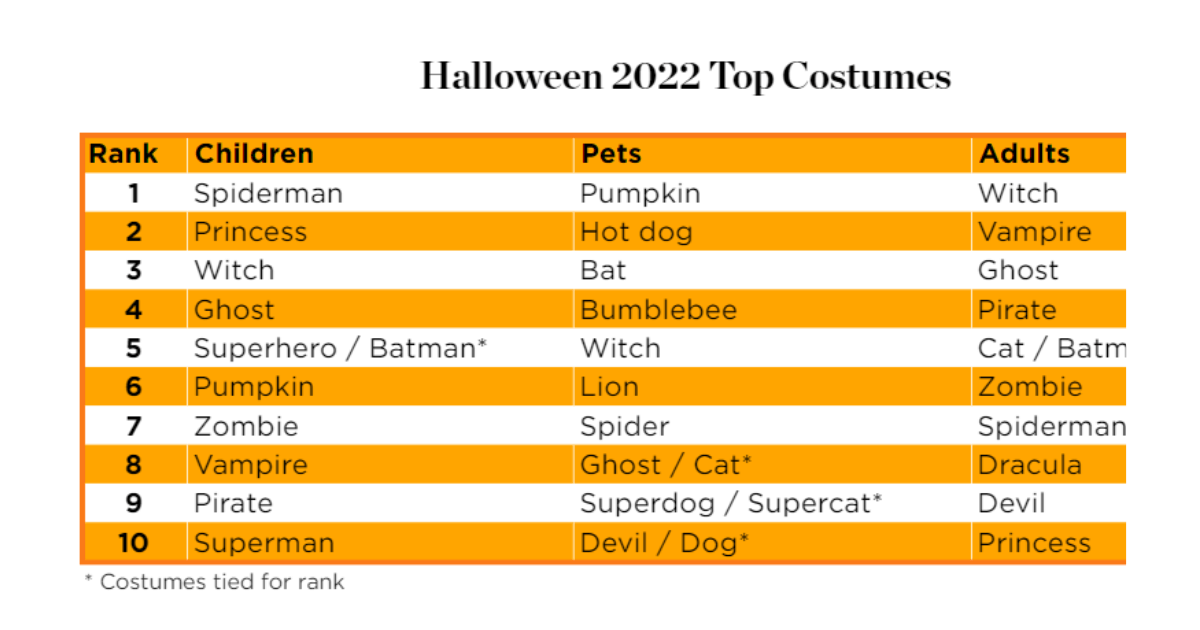 Washington, D.C. — Participation in Halloween-related activities will resume to pre-pandemic levels, with 69% of consumers planning to celebrate the holiday this year, up from 65% in 2021 and comparable to 68% in 2019, according to the National Retail Federation’s annual survey conducted by Prosper Insights & Analytics. With the spike in participation, total Halloween spending is expected to reach a record $10.6 billion, exceeding last year’s record of $10.1 billion.

“Halloween is an exciting time for many families, and that enthusiasm is reflected in the number of Americans who plan to celebrate the holiday this year,” NRF President and CEO Matthew Shay said. “As consumers continue to return to pre-pandemic behaviors, retailers are prepared to meet that demand and help make this holiday a fun and memorable one.”

The top ways consumers plan to celebrate include handing out candy (67%), decorating their home or yard (51%), dressing up in costume (47%), carving a pumpkin (44%) and throwing or attending a Halloween party (28%). Similar to last year, one in five plan to dress their pet up in a costume.

Consumers plan to spend $100 on average for Halloween candy, décor, cards and costumes. This amount is on par with last year’s record of $103 and is the second highest in the survey’s history.

While total spending on costumes, decorations and candy is expected to reach record levels, there was a slight drop in spending on greeting cards. Unsurprisingly, costumes account for the biggest area of Halloween purchases. Spending on kids’ and adult costumes is expected to total $2.9 billion, the highest amount since 2017. Pet spending is expected to exceed last year’s record high, reaching $710 million. Similar to recent years, Halloween enthusiasts will once again start their shopping early, with nearly half (47%) beginning in September or earlier. Forty percent plan to purchase their items at discount stores, 36% will go to specialty Halloween or costume stores and 31% will shop online.

The leading source of Halloween costume inspiration remains from online searches (36%), while one-quarter say they will look within retail stores and 19% will get ideas from friends and family.

“Social media is playing an increasingly important role in consumer behavior, and Halloween is no different,” Prosper Insights Executive Vice President of Strategy Phil Rist said. “Younger consumers, particularly those under the age of 25, will look to platforms like Instagram and TikTok for costume inspiration this year.”

The survey asked 8,283 consumers about Halloween shopping plans. It was conducted September 1-6 and has a margin of error of plus or minus 1.1 percentage points.

About NRF
The National Retail Federation, the world’s largest retail trade association, passionately advocates for the people, brands, policies and ideas that help retail thrive. From its headquarters in Washington, D.C., NRF empowers the industry that powers the economy. Retail is the nation’s largest private-sector employer, contributing $3.9 trillion to annual GDP and supporting one in four U.S. jobs – 52 million working Americans. For over a century, NRF has been a voice for every retailer and every retail job, educating, inspiring and communicating the powerful impact retail has on local communities and global economies. nrf.com