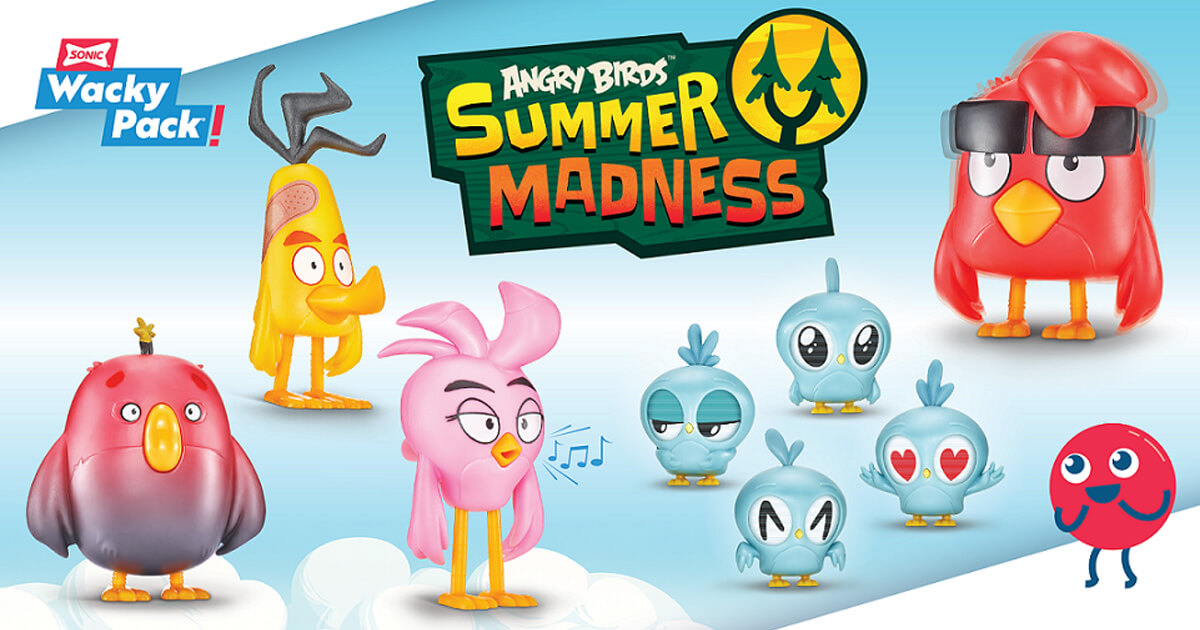 From March 28 to May 1, 2022, Sonic guests can collect eight different Angry Birds toys in their Wacky Pack kid’s meals. Available across the more than 3,500 SONIC Drive-In locations in the US, the toys all have unique features such as whistling, wobbling and face-changing effects.

“We are so excited to be partnering up once again with SONIC Drive-In, this time in celebration of Angry Birds: Summer Madness. The new range of collectable premiums brings all the fun and humor of our latest series to life in a new way” says Katri Chacona, Director of Brand Licensing at Rovio Entertainment.

Angry Birds: Summer Madness sees sparks and feathers fly when a teenage Red, Chuck, Bomb and Stella spend a wild summer together with other Angry Birds at Camp Splinterwood.

About Rovio Entertainment
Rovio Entertainment Corporation is a global mobile-first games company that creates, develops and publishes mobile games, which have been downloaded over 5 billion times. Rovio is best known for the global Angry Birds brand, which started as a popular mobile game in 2009, and has since evolved from games to various entertainment, animations and consumer products in brand licensing. Rovio has produced The Angry Birds Movie (2016), and it’s sequel, The Angry Birds Movie 2 was released in 2019. The company offers multiple mobile games and has seven games studios – two in Espoo (Finland), one in Stockholm (Sweden), Copenhagen (Denmark), Montreal and Toronto (Canada), as well as a subsidiary in Izmir (Turkey) called Ruby Games, which was acquired in 2021. Most of the employees are based in Finland where Rovio is headquartered. The company’s shares are listed on the main list of NASDAQ Helsinki stock exchange with the trading code ROVIO.

About IMG
IMG is a global leader in sports, fashion, events and media. The company manages some of the world’s greatest athletes and fashion icons; owns and operates hundreds of live events annually; and is a leading independent producer and distributor of sports and entertainment media. IMG also specializes in licensing, sports training and league development. IMG is a subsidiary of Endeavor, a global sports and entertainment company.

The Exorcist, Killer Klowns, Annabelle and The Nun are now available!