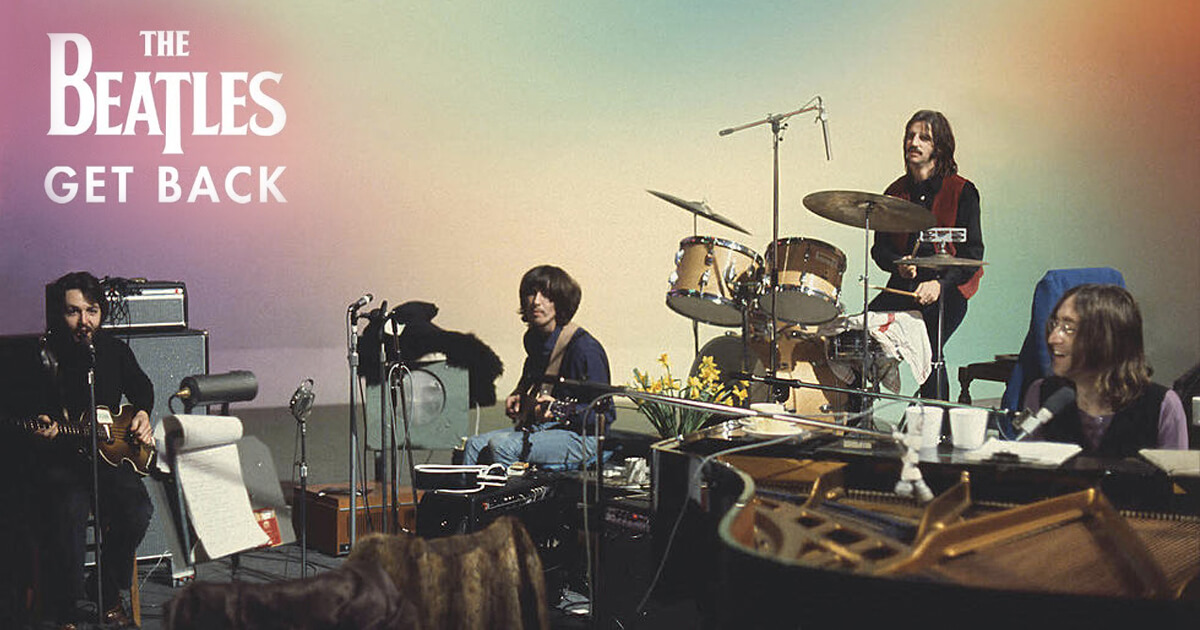 “The Beatles: Get Back,” A Disney+ Original Documentary Series

Over Six Hours of Never-Before-Seen Restored Footage, Including The Beatles’ Last Live Performance, to Roll Out on Disney+ Over Three Days, November 25, 26 and 27, 2021

Because of the wealth of tremendous footage Peter Jackson has reviewed, which he has spent the past three years restoring and editing, “The Beatles: Get Back” will be presented as three separate episodes. Each episode is approximately two hours in length, rolling out over three days, November 25, 26 and 27, 2021, exclusively on Disney+.

“As a huge Beatles fan myself, I am absolutely thrilled that Disney+ will be the home for this extraordinary documentary series by the legendary filmmaker Peter Jackson,” said Bob Iger, Executive Chairman and Chairman of the Board, The Walt Disney Company. “This phenomenal collection of never-before-seen footage offers an unprecedented look at the close camaraderie, genius songwriting, and indelible impact of one of the most iconic and culturally influential bands of all time, and we can’t wait to share ‘The Beatles: Get Back’ with fans around the world.”

Peter Jackson commented, “In many respects, Michael Lindsay-Hogg’s remarkable footage captured multiple storylines. The story of friends and of individuals. It is the story of human frailties and of a divine partnership. It is a detailed account of the creative process, with the crafting of iconic songs under pressure, set amid the social climate of early 1969. But it’s not nostalgia – it’s raw, honest, and human. Over six hours, you’ll get to know The Beatles with an intimacy that you never thought possible.”

He added, “I’m very grateful to The Beatles, Apple Corps and Disney for allowing me to present this story in exactly the way it should be told. I’ve been immersed in this project for nearly three years, and I’m very excited that audiences around the world will finally be able to see it.”

Directed by three-time Oscar®-winning filmmaker Peter Jackson (“The Lord of the Rings” trilogy, “They Shall Not Grow Old”), “The Beatles: Get Back” takes audiences back in time to the band’s intimate recording sessions during a pivotal moment in music history. The documentary showcases the warmth, camaraderie and creative genius that defined the legacy of the iconic foursome, compiled from over 60 hours of unseen footage shot in January 1969 (by Michael Lindsay-Hogg) and more than 150 hours of unheard audio, all of which has been brilliantly restored. Jackson is the only person in 50 years to have been given access to these private film archives. “The Beatles: Get Back” is the story of John Lennon, Paul McCartney, George Harrison and Ringo Starr as they plan their first live show in over two years, capturing the writing and rehearsing of 14 new songs, originally intended for release on an accompanying live album. The documentary features – for the first time in its entirety – The Beatles’ last live performance as a group, the unforgettable rooftop concert on London’s Savile Row, as well as other songs and classic compositions featured on the band’s final two albums, Abbey Road and Let It Be.

An exciting new collaboration between The Beatles and Jackson presented by The Walt Disney Studios in association with Apple Corps Ltd. and WingNut Films Productions Ltd., “The Beatles: Get Back” is directed by Peter Jackson, produced by Clare Olssen (“They Shall Not Grow Old”) and Jonathan Clyde (“Eight Days a Week”), with Ken Kamins (“The Hobbit” trilogy) and Apple Corps’ Jeff Jones (“Eight Days a Week”) serving as executive producers. Jabez Olssen (“Rogue One: A Star Wars Story”) serves as the documentary’s editor, and the music is mixed by Giles Martin (“Rocketman”) and Sam Okell (“Yesterday”).

“The Beatles: Get Back” is being made with the enthusiastic support of Paul McCartney, Ringo Starr, Yoko Ono Lennon and Olivia Harrison.

Ahead of the documentary’s Disney+ debut, Apple Corps Ltd./Callaway Arts & Entertainment will release The Beatles: Get Back book on October 12. Beautifully designed and produced, the 240-page hardcover complements the “Get Back” documentary with transcriptions of The Beatles’ recorded conversations and hundreds of exclusive, never before published photos from the three weeks of sessions. The collectible book will be published in nine international language editions, including English.

About Disney+:
Disney+ is the dedicated streaming home for movies and shows from Disney, Pixar, Marvel, Star Wars, National Geographic, and more. As part of Disney’s Media and Entertainment Distribution segment, Disney+ is available on most internet-connected devices and offers commercial-free programming with a variety of original feature-length films, documentaries, live-action and animated series, and short-form content. Alongside unprecedented access to Disney’s incredible library of film and television entertainment, the service is also the exclusive streaming home for the latest releases from The Walt Disney Studios. Disney+ is available as part of a bundle offer that gives subscribers access to Disney+, Hulu, and ESPN+. Visit DisneyPlus.com to subscribe and/or learn more about the service.

About Apple Corps Ltd.:
Apple Corps Ltd. was founded by The Beatles in 1968 to oversee the band’s own creative and business interests. As part of its management of The Beatles’ entire intellectual property canon, the London-based company administers the legendary band’s recorded catalogue along with film, theatrical, and book publishing rights. Apple Corps has piloted innovative, award-winning Beatles projects which have become benchmarks for pioneering accomplishment, including The Beatles Anthology TV series, book and music collections; The Beatles 1; Anniversary Editions for Sgt. Pepper’s Lonely Hearts Club Band, The BEATLES (‘White Album’) and Abbey Road; The Beatles LOVE by Cirque du Soleil®; SiriusXM’s The Beatles Channel; and “The Beatles: Eight Days A Week – The Touring Years,” directed by Ron Howard.

About WingNut Films Ltd.:
WingNut Films is based in Wellington, New Zealand and was founded by Peter Jackson and Fran Walsh. WingNut Films has produced all of Peter Jackson’s films, including “Heavenly Creatures,” “The Lord of the Rings” and “The Hobbit Trilogies,” “King Kong,” “The Lovely Bones” and most recently the acclaimed First World War documentary “They Shall Not Grow Old.” WingNut has also produced “The Adventures of Tin Tin,” directed by Steven Spielberg, “District 9,” directed by Neill Blomkamp, “West of Memphis,” directed by Amy Berg and “Mortal Engines,” directed by Christian Rivers.