Rainbow Production’s David Scott leads the tributes to the co-founder of CPL who sadly passed away last week.

David Cardwell was an inspirational man. Many of us know all about the successes of CPL (or CPLG as it is now called) over the past 45 years, but few people know that he worked his way up from an under-privileged background, leaving school at 14 and coming to London full of ideas, energy and ambition. He worked as an errand boy for the Daily Express, helped create the Elvis Monthly (and relished the chance to interview Elvis himself).

He then worked as a music journalist, including for NME, became a publicist and manager for new pop music acts, most notably The Paper Dolls and Pikketywitch, and then in 1974 mortgaged his family house to help fund the first big contract for the just-founded CPL, working with Cosgrove Hall to make a TV series of Noddy.

In those early days, together with his business partner Richard Culley, and along with a very small number of other pioneers and competitors, they established the UK licensing industry. David was someone who has not only helped shape a sector of British business, but also our very way of life and how we consume and interact with entertainment and the media. There are generations of people who have treasured memories of their childhood characters who will never know that their pleasure was enhanced by toys, clothing and a myriad of other items that only exist as they do today because of the drive, vision and creativity displayed by David, Richard and their competitors/colleagues some decades earlier.

CPL grew to become a major player in, firstly, UK licensing followed by an expansion into mainland Europe via a joint-venture called ELG (combining latterly with CPL to become CPLG). Indeed, it became a global success with a worldwide reach and a key port of call for overseas and home-grown rights owners wishing to exploit their brands in the markets where CPL was established. Always at the forefront of the industry, CPL was a veritable academy of licensing and many of its old boys and girls have themselves gone on to become leading lights in the licensing business.

It was a sad coincidence that we should hear the news about David’s death during BLE as the very first licensing exhibitions, and the forerunners of BLE, were supported by CPL which was such a strong player in the licensing world by that time. However, it gave those of us who knew him a chance to meet and chat together and reminisce about David and relate our favourite stories. I have included some of these stories, and thoughts, all recounted with affection by people whose lives, like mine, were changed by their good fortune in knowing him. 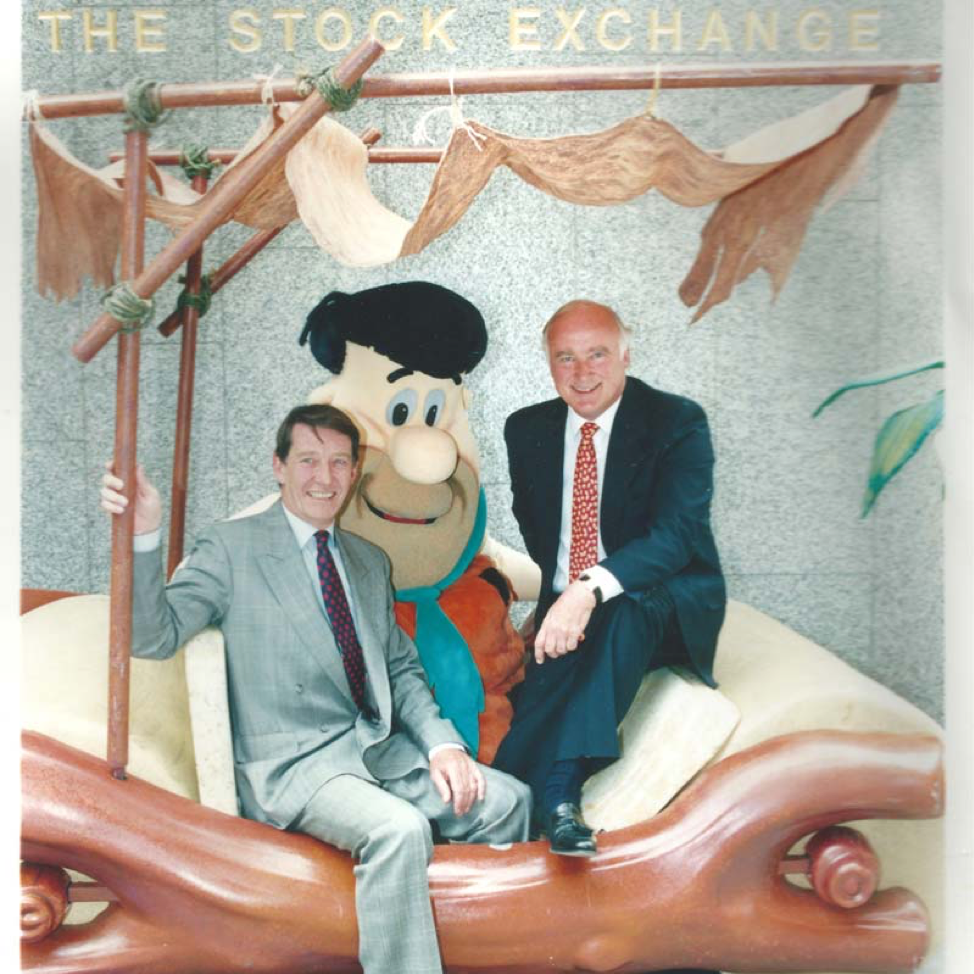 I am indebted to Dr Sarah Cardwell Davies, David’s daughter, who kindly provided the details of David’s early years and below are comments from a small number of those who knew him.

“It was a bold decision when David and I set up CPL in 1974; back then character licensing really was in its infancy.  Most of the outside world had no idea what we were talking about and had doubts we could make a living (Noddy on t-shirts? What next!). We proved them wrong, of course.

Our enduring partnership I believe lasted as long as it did, mainly because we complemented each other perfectly, were passionate about what we were doing and had the ability to make each other laugh. At the beginning David was the money man and I was acquiring rights and selling licences. It worked; we built from there. David became so knowledgeable I started to believe he’d crept off and done an accountancy degree such was his overnight ability to challenge more than one accountant, and mostly he was right.

Building the company together from scratch was challenging and exciting in equal measure. We had enormous fun over the years, took risks and many paid off. It became a little more serious when we sold to Mosaic and then went public, but at the start we really were living by the seat of our pants. One day David told me simply, we were running out of money. As luck would have it, I received a cheque that day for an advance on one of the first licences we’d secured. We celebrated in the very first branch of Pizza Express in Soho!   The next week David issued a set of rules: no taxis, no couriers (all mail in London to be delivered by foot or bus), no business lunches and a freeze on hiring. He was right, of course!

I feel blessed to have met David, follow our dream and grow CPL with him into the global success it has become.”
Richard Culley

“It’s difficult to dissociate David from the industry and my career – he gave me my first break in the business, as he did to so many. He had a strategic business mind and was a visionary – he was perhaps the first to see the opportunity for toy driven licensing/brand extensions. Knickerbocker Toy – which quickly became Hasbro Europe – was a client, with My Little Pony being one of the first of those properties to launch in the UK when I joined CPL in 1984. David quickly saw the opportunity as MLP became a craze and Hasbro could not keep up demand for toy products so licensed merchandise from CPL met that demand. Toy buyers were taken by surprise… one I remember calling it ‘My Little Warthog’ and refusing to stock it… oops!”
Charles Day

“He was a visionary and a mentor to me, as he was to so many others.”
Caroline Mickler

“David was one of a kind and I was privileged to have worked for him. He gave me an opportunity that I will be forever grateful for as it changed my life. There are so many memories to pull from such as weekly dinners at Chez Gerard or late nights at the Essex House bar in New York during Licensing Show, but my most memorable were the many meetings in the 12th floor board room on Percy Street where I would desperately try to breathe through a cloud of smoke as I hung my head out the window gasping for some fresh air which needless to say was always a challenge in Central London. They broke the mould with David and he will be missed.”
Kirk Bloomgarden

“David Cardwell, a true entrepreneur and visionary, a great friend and mentor. I knew him as an industry leader and his unique business style was very apparent when in the space of one week, he agreed to let me open up the first CPLG office in Germany in 1996, after having bought the remaining shares of the ELG operation. In the early Nineties (1992-1995), he started a pan-European agency network, a testament to his vision of future market developments.

As a smoker I fondly remember his office in Percy Street being a bit ‘smoky’, unlike his business instinct and decisions. When he last bought back CPLG from a Swiss based sports licensing company, he offered several members of his team the possibility to invest in the company and I remember him pushing us to stop reading the 150 plus pages purchase agreement, as everything should be fine [and] we should just get on with it.

David never really was a patient man. The board meetings were always short and to the point and if anyone started to ramble on, he was quite quick to put a stop to it. However, when he was asked about the future of the licensing business or for his advice, he always took the time to explain. I am extremely thankful to have worked closely with David, he formed my insight into our business. He was great fun to be with and I have so many fond memories of our travel together, the business diners, the drinks and many cigarettes! David had a great sense of humour, a sharp intellect and loved to live a good life and I will miss him dearly, as many others will do. Cheers David.”
Katarina Dietrich

“During my time at Copyright Promotions I held various roles, one of which was a new business one that encompassed developing new opportunities for licensing sales outwith and within the group, combined with seeking out new representations. Often I had to report directly to David. While he could be very direct in his feedback I welcomed his advice and encouragement.

He would always make pro-active suggestions, often fired up by products he had seen in the US and he, of course, had a great reservoir of knowledge of the licensing industry. He always knew someone, or else someone who knew someone. I really enjoyed chatting to him and listening to his anecdotes including ones from his time in the music industry. He was also very kind to me when my father was terminally ill and in hospital. He allowed me to leave work during office hours and actively encouraged me to leave the office to go and see my Dad. It was a thoughtful thing for David to do and to suggest. I remember David with fondness, respect and admiration. He helped shape our industry and helped a lot of us build our careers.”
Ian Downes

“Deeply saddened to hear of David’s passing. A real master of the understated but an unwavering enthusiasm for his clients, people and business. RIP.”
Simon Gresswell

“I have many fond memories of David. Aside from him accidentally meeting the Queen, one that always makes me smile is our morning cigarette in the Percy Street office while we waited for the kettle to boil and David describing how he made a jam roly-poly over the weekend. Only he forgot to remove the tea towel and rolled towel with the sponge! I will hold these little stories and moments in my heart forever, along with his random texts to check in over the years. No more texts my dear friend, thank you for everything you did for me – I will miss you very much.”
Angeles Blanco

“My first job in licensing was head of PR at CPL and I very quickly recognised that I had joined an industry full of fantastic characters who really knew how to work hard and play just as hard. David was most certainly one of these! Something we all looked forward to was the annual Christmas party which, certainly at that time seemed extravagant affairs at which there was very little in the way of holding back. There is now a select group of licensing people who will always remember seeing David careering down the stairs at Shepperton Studios on a tea tray!”
Jane Garner

“David offered me a job in 1992 with a struggling company called Rainbow Productions, which was a subsidiary of CPL in those days. He interviewed me on a Monday and I had the job of managing director by Friday (David was not one for hanging around) despite my not knowing what a costume character was, nor ever having visited the Rainbow premises. He was a hard taskmaster but always kept faith in myself and the Rainbow team until, in 1995, he went one step further and sold me the company – in the process changing my business career immeasurably for the better.”
David Scott