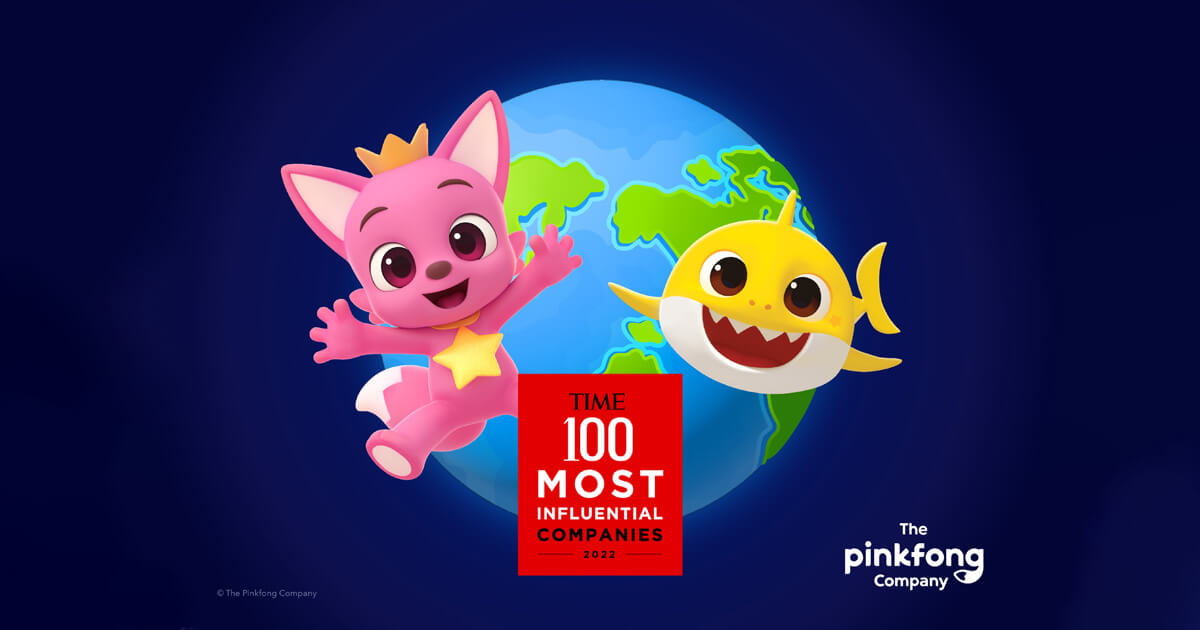 [Seoul – March 30, 2022] The Pinkfong Company, the global entertainment company behind Baby Shark, announced today that the company has been named to TIME’s second annual TIME100 Most Influential Companies list—an extension of the annual TIME100 list of the world’s most influential people—that will highlight 100 companies making an extraordinary impact around the world.

The TIME100 list highlights The Pinkfong Company’s creative efforts to expand its iconic intellectual property Baby Shark into the digital realm as a reason for the inclusion. In the write-up of The Pinkfong Company, TIME cited that Baby Shark became the first YouTube video to be viewed more than 10 billion times and it continues to grow into a feature-length film, an animated preschool series that launched on Nickelodeon, and the NFT collection.

“It is an honor to be recognized as one of the most influential companies by TIME this year. With a clear vision and passion to explore new opportunities in the fast-paced creative and digital environment, we have pushed our creative limits to pioneer our own way of entertaining people globally,” said Minseok Kim, CEO of The Pinkfong Company. “It has been an incredible journey to witness how our content has connected people around the world. The Pinkfong Company will continue to offer exceptional content experiences to audiences of all ages worldwide.”

Founded as a startup offering children’s educational services, The Pinkfong Company has evolved into the home of iconic IPs including Pinkfong and Baby Shark. With the most viewed video in YouTube history, Baby Shark became one of the most notable cultural phenomena in the world. Following the success of the iconic song and video, Baby Shark’s universe continues to grow with the animated preschool series on Nickelodeon, live tours throughout the world, and the NFT collection.

In addition to the successful rollout of Baby Shark’s Big Show!, the hit animated preschool series co-produced with Nickelodeon Animation, season two of the series will debut later this year in the U.S while its first-ever original feature-length film is in development for 2023.

In January 2022, the company changed its corporate name to The Pinkfong Company. The name change marks the company’s new chapter to expand its core business and reach wider audiences, diving into digital comics and novels, developing a brand-new 3D animated show, and opening the Singapore office as the business hub for Asia Pacific countries.

To assemble the list, TIME solicited nominations from every sector—ranging from health care and entertainment to transportation and technology—from our editors and correspondents around the world, as well as from industry experts. Then, TIME editors evaluated each one on key factors, including relevance, impact, innovation, leadership, and success.

About The Pinkfong Company
The Pinkfong Company is a global entertainment company that delivers content and entertaining experiences around the world. Driven by award-winning brands and IPs, the company has created and distributed a range of content across genres and formats including original animated series, world live tours, interactive games, and more. Believing in the power of entertaining and engaging content, The Pinkfong Company is committed to connecting people around the world and bringing joy and inspiration to worldwide audiences of all ages. For more information, please visit our website or follow the company on LinkedIn.